From wiki.gis.com
(Redirected from Hypsometric tinting)
Jump to: navigation, search

Hypsometric Tinting (also called layer tinting, elevation tinting, elevation coloring, or hypsometric coloring) is a cartographic technique used to enhance the depiction of relief through placing colors (or tints) between contour lines. Hypsometric tinting can depict ranges of elevation as bands of color in a graduated scheme or as a color ramp applied to the lines themselves. Tints are typically laid semi-transparently over a hillshaded surface.[1]

The first use of color to indicate changes in elevation is attributed to Leonardo da Vinci on a map of Central Italy around 1503.[2] During the late 19th century, Scottish engraver John Bartholomew, Jr. became the first cartographer to color different layers on maps to indicate the height of land or the depth of the sea.[3] He used green to show low ground, brown for higher elevations, and purple fading to white for the highest areas of some maps. The firm where he worked, John Bartholomew and Son, is credited with popularizing this technique, and its color scheme has become conventional in depicting gradual value changes in data. One of the earliest maps to use these ideas was a bathymetric map made by Matthew Fontaine Maury in 1853 in a map to help sailors chart the wind on the sea.[4]

On a map, the different shades represent different elevations. This method of cartographic relief depiction selects colors for the tint which are usually assumed to relate to the ground cover found at the area being mapped. 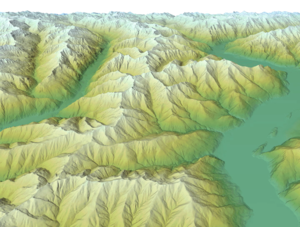 The snow-capped mountains indicate the peaks while the blue base of the mountain may represent a river valley.
For instance, the highest elevation area on a map might be shaded white to represent snow-capped peaks, while the lowest elevated area may be shaded dark green to represent low-laying valleys or ground level. The advantage of using hypsometric tinting in terrain design is that the map reader can see an accurate depiction of the elevation of any given area on the map.

There are two ways of depicting hypsometric tinting in ArcGIS. The first way is to use layer tinting as classified values. Classified values allow each elevation to be depicted in areas separated by a neutral gray line. A benefit of this is that colors may be represented exactly how they are entered. However, creating intervals for the elevations along with a color for each can be tedious. The next way is to use a color ramp. This makes transitioning elevations appear smooth and transitional. In ArcMap, the setting for this is called "Stretched". A benefit of using this technique is that the transitional is very natural; however, the user has less control over the colors of the elevations.[5]

The difficulty in using this method is that the human mind automatically associates certain colors with certain features that may not be completely accurate on the map. For example, many people would automatically associate green on a map with a lush green forest. Dark green is also typically used to show low elevation with hypsometric tinting. This causes problems when a place, such as Death Valley in California, is represented by a dark green because of its low elevation since it does not have very high levels of vegetation growth. This could be resolved by using cross-blended hypsometric tinting.[6] Using this method masks the colors in a way that removes possibly confusing colors but sacrifices some accuracy of the map. It is best used in a small scale map.