Image rectification is a transformation process used to project multiple images onto a common image surface. It is used to correct a distorted image into a standard coordinate system. 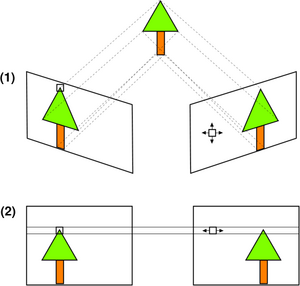 the search space before (1) and after (2) rectification

Stereo vision uses triangulation based on epipolar geometry to determine distance to an object.

Between two cameras there is a problem of finding a corresponding point viewed by one camera in the image of the other camera. (This is called the correspondence problem.) In most camera configurations, finding correspondences requires a search in two dimensions. However, if the two cameras are aligned to have a common image plane, the search is simplified to one dimension - a line that is parallel to the line between the cameras (the baseline). Image rectification is an equivalent (and more often used) alternative to this precise camera alignment. It transforms the images to make the epipolar lines (epipolar geometry) align horizontally.[1]

If the images to be rectified are taken from camera pairs without geometric distortion, this calculation can easily be made with a linear transformation. X & Y rotation puts the images on the same plane, scaling makes the image frames be the same size and Z rotation & skew adjustments make the image pixel rows directly line up. The rigid alignment of the cameras needs to be known (by calibration) and the calibration coefficients are used by the transform.[2]

In performing the transform, if the cameras themselves are calibrated for internal parameters, an essential matrix relates the relationship between the cameras. The more general case (without camera calibration) is represented by the fundamental matrix. If the fundamental matrix is not known, it is necessary to find preliminary point correspondences between stereo images to facilitate its extraction.[2]

Image rectification in GIS converts images to a standard map coordinate system. This is done by matching ground control points (GCP) in the mapping system to points in the image. These GCPs calculate necessary image transforms.[3]

Primary difficulties in the process occur

The maps that are used with rectified images are non-topographical. However, the images to be used may contain distortion from terrain. Image orthorectification additionally removes these effects.[3]