Automated information retrieval systems are used to reduce what has been called "information overload". Many universities and public libraries use IR systems to provide access to books, journals and other documents. Web search engines are the most visible IR applications.

The idea of using computers to search for relevant pieces of information was popularized in an article As We May Think by Vannevar Bush in 1945.[1] First implementations of information retrieval systems were introduced in the 1950s and 1960s. By 1990 several different techniques had been shown to perform well on small text corpora (several thousand documents).[1]

In 1992 the US Department of Defense, along with the National Institute of Standards and Technology (NIST), cosponsored the Text Retrieval Conference (TREC) as part of the TIPSTER text program. The aim of this was to look into the information retrieval community by supplying the infrastructure that was needed for evaluation of text retrieval methodologies on a very large text collection. This catalyzed research on methods that scale to huge corpora. The introduction of web search engines has boosted the need for very large scale retrieval systems even further.

The use of digital methods for storing and retrieving information has led to the phenomenon of digital obsolescence, where a digital resource ceases to be readable because the physical media, the reader required to read the media, the hardware, or the software that runs on it, is no longer available. The information is initially easier to retrieve than if it were on paper, but is then effectively lost.

An information retrieval process begins when a user enters a query into the system. Queries are formal statements of information needs, for example search strings in web search engines. In information retrieval a query does not uniquely identify a single object in the collection. Instead, several objects may match the query, perhaps with different degrees of relevancy.

An object is an entity which keeps or stores information in a database. User queries are matched to objects stored in the database. Depending on the application the data objects may be, for example, text documents, images or videos. Often the documents themselves are not kept or stored directly in the IR system, but are instead represented in the system by document surrogates.

Most IR systems compute a numeric score on how well each object in the database match the query, and rank the objects according to this value. The top ranking objects are then shown to the user. The process may then be iterated if the user wishes to refine the query.

Many different measures for evaluating the performance of information retrieval systems have been proposed. The measures require a collection of documents and a query. All common measures described here assume a ground truth notion of relevancy: every document is known to be either relevant or non-relevant to a particular query. In practice queries may be ill-posed and there may be different shades of relevancy.

Precision is the fraction of the documents retrieved that are relevant to the user's information need.

In binary classification, precision is analogous to positive predictive value. Precision takes all retrieved documents into account. It can also be evaluated at a given cut-off rank, considering only the topmost results returned by the system. This measure is called precision at n or P@n.

Note that the meaning and usage of "precision" in the field of Information Retrieval differs from the definition of accuracy and precision within other branches of science and technology.

Recall is the fraction of the documents that are relevant to the query that are successfully retrieved.

In binary classification, recall is called sensitivity. So it can be looked at as the probability that a relevant document is retrieved by the query.

It is trivial to achieve recall of 100% by returning all documents in response to any query. Therefore recall alone is not enough but one needs to measure the number of non-relevant documents also, for example by computing the precision.

In binary classification, fall-out is closely related to specificity

. It can be looked at as the probability that a non-relevant document is retrieved by the query.

It is trivial to achieve fall-out of 0% by returning zero documents in response to any query.

The weighted harmonic mean of precision and recall, the traditional F-measure or balanced F-score is:

This is also known as the

measure, because recall and precision are evenly weighted.

The general formula for non-negative real β is:

Two other commonly used F measures are the

measure, which weights recall twice as much as precision, and the

measure, which weights precision twice as much as recall.

The F-measure was derived by van Rijsbergen (1979) so that

"measures the effectiveness of retrieval with respect to a user who attaches β times as much importance to recall as precision". It is based on van Rijsbergen's effectiveness measure

where r is the rank, N the number retrieved, rel() a binary function on the relevance of a given rank, and P() precision at a given cut-off rank.

NOTE: number of relevant documents is actually number of relevant documents in the entire COLLECTION. Otherwise this is ambiguous when dealing with a hitlist that isnt the entire collection. See: [4]. There is very little written about MAP even though it is a widely used metric. The argument for entire collection is that otherwise you don't get a sense of recall. 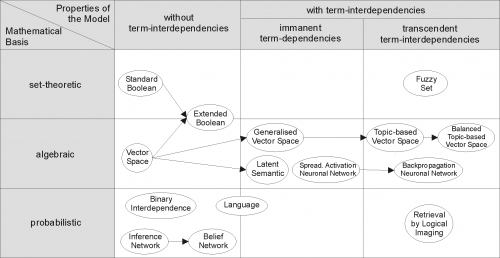 For the information retrieval to be efficient, the documents are typically transformed into a suitable representation. There are several representations. The picture on the right illustrates the relationship of some common models. In the picture, the models are categorized according to two dimensions: the mathematical basis and the properties of the model.

Second dimension: properties of the model

Awards in the field