From wiki.gis.com
Jump to: navigation, search
For other uses, see Interpolation (disambiguation).

In the mathematical subfield of numerical analysis, interpolation is a method of constructing new data points within the range of a discrete set of known data points.

In engineering and science one often has a number of data points, as obtained by sampling or experimentation, and tries to construct a function which closely fits those data points. This is called curve fitting or regression analysis. Interpolation is a specific case of curve fitting, in which the function must go exactly through the data points.

A different problem which is closely related to interpolation is the approximation of a complicated function by a simple function. Suppose we know the function but it is too complex to evaluate efficiently. Then we could pick a few known data points from the complicated function, creating a lookup table, and try to interpolate those data points to construct a simpler function. Of course, when using the simple function to calculate new data points we usually do not receive the same result as when using the original function, but depending on the problem domain and the interpolation method used the gain in simplicity might offset the error.

An interpolation of a finite set of points on an epitrochoid. Points through which curve is splined are red; the blue curve connecting them is interpolation.

For example, suppose we have a table like this, which gives some values of an unknown function f. 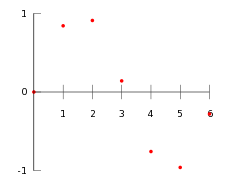 Plot of the data points as given in the table.

Interpolation provides a means of estimating the function at intermediate points, such as x = 2.5.

There are many different interpolation methods, some of which are described below. Some of the concerns to take into account when choosing an appropriate algorithm are: How accurate is the method? How expensive is it? How smooth is the interpolant? How many data points are needed?

For more details on this topic, see Nearest-neighbor interpolation.

The simplest interpolation method is to locate the nearest data value, and assign the same value. In one dimension, there are seldom good reasons to choose this one over linear interpolation, which is almost as cheap, but in higher dimensions, in multivariate interpolation, this can be a favourable choice for its speed and simplicity.

Generally, linear interpolation takes two data points, say (xa,ya) and (xb,yb), and the interpolant is given by:

Linear interpolation is quick and easy, but it is not very precise. Another disadvantage is that the interpolant is not differentiable at the point xk. 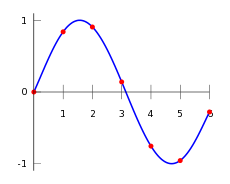 Consider again the problem given above. The following sixth degree polynomial goes through all the seven points: 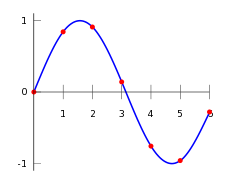 Example of the IDW process

One of the most commonly used techniques for interpolation of scatter points is IDW (Inverse Distance Weighting). IDW interpolation estimates cell values in a raster from a set of sample points that have been weighted so that the farther a sampled point is from the cell being evaluated, the less weight it has in the calculation of the cell's value[1] This process is based on the assumption that things that are close to one another are more alike than those that are farther apart. In addition to measuring Euclidean distance, a typical IDW formula involves a weighting power (p) that allows the user to determine how quickly the weight loses effect away from observation points.[2] A higher value of p indicates that the weight has less effect away from observation points. The use of IDW is useful in interpolation models as well as in the creation of isometric maps. For instance, a map modeling water flow from a city sidewalk relies on connecting points of equal value. Using IDW in a GIS or in AutoCAD would allow for greater accuracy in terms of connecting these points.

Other forms of interpolation

The Whittaker–Shannon interpolation formula can be used if the number of data points is infinite.

Sometimes, we know not only the value of the function that we want to interpolate, at some points, but also its derivative. This leads to Hermite interpolation problems.

One automated interpolating method commonly used to create Isarithmic maps for true point data is the " Inverse Distance method", which follows a relatively simple process where a grid is drawn on top of the control points to estimate values at each grid point. This estimation allows a proper interpolation of those grid points and later, the creation of contour lines. The term inverse-distance is used because control points are weighted as an inverse function of their distance from grid points, therefore control points near a grid point are weighted more than those far away. One issue with this technique is that it cannot account for certain trends that come with the data itself. The value estimation at grid points can be obtained as follows:

The term extrapolation is used if we want to find data points outside the range of known data points.

In curve fitting problems, the constraint that the interpolant has to go exactly through the data points is relaxed. It is only required to approach the data points as closely as possible (within some other constraints). This requires parameterizing the potential interpolants and having some way of measuring the error. In the simplest case this leads to least squares approximation.

Approximation theory studies how to find the best approximation to a given function by another function from some predetermined class, and how good this approximation is. This clearly yields a bound on how well the interpolant can approximate the unknown function.