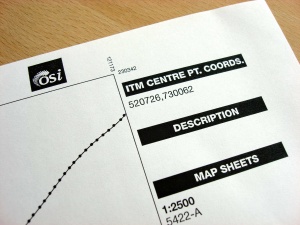 ITM coordinates on an OSI map from 2006. In this example the easting and the northing are separated by a comma. 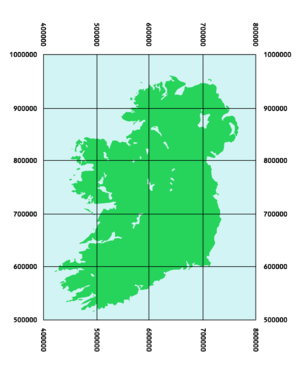 While the existing UTM coordinate system partly fulfilled the requirement for direct GPS compatibility it had some drawbacks, including varying levels of distortion across the island due to the central meridian being at the west coast of Ireland.

The new system needed to satisfy various criteria: GPS compatibility, map distortion for the whole island of Ireland had to be minimal, it was to be conformal and backward compatible with existing mapping. A customized Transverse Mercator projection was chosen.

ITM and the older more established Irish Grid will (initially at least) be used in parallel. As a result ITM coordinates had to be obviously different so users would not confuse the two. This was done by shifting the ITM false origin further into the Atlantic and thereby creating substantially different coordinate numbers for any given location.

While OSI and OSNI intend to supply map information in the older Irish Grid format into the future, the Irish Institution of Surveyors has recommended that ITM be adopted as soon as possible as the preferred official coordinate system for Ireland.

An ITM coordinate is generally given as a pair of two six-digit numbers (excluding any digits behind a decimal point which may be used in very precise surveying). The first number is always the easting and the second is the northing. The easting and northing are in meters from the false origin.

The ITM coordinate for the Spire of Dublin on O'Connell Street is:

The equivalent Irish Grid coordinate for the same location is:

The Spire of Dublin example provides a fix for a location that is accurate to 1 meter. With ITM it is possible to give a more accurate coordinate for a given location by using a decimal point after the initial six figure easting and northing.

The ITM coordinate for the passive GPS station at the OSI office is:

This ITM coordinate has three digits behind the decimal point which gives a fix for a location with millimeter accuracy. Also notice how the easting in this example is indicated with an “E” and likewise an “N” for the northing. The fact that the coordinate is in meters is indicated by the lowercase m.

It should be noted that with ITM there is no provision for using myriad letters and truncated coordinates as there is with the Irish Grid. Every coordinate must be given with at least a six digit easting and northing from the false origin.