An Isarithmic map is a type of Thematic map that represents a continuous field using line and/or region symbols to connect places of similar value. [1] It is sometimes called a heat map, although the term heat map should only be used for one type of isarithmic map that represents density. In general, these maps are used to help visualize continuous data sets by utilizing color, especially hue and value. There are a number of ways to symbolize isarithmic maps; no matter the design method, the phenomenon being represented must be a quantitative continuous field. 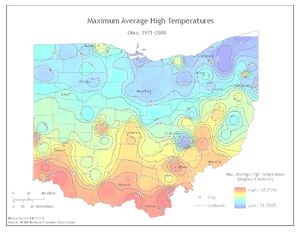 An Isarithmic map of temperatures'.
Isarithmic maps are usually created by interpolating from raster data or from a set of sample points; for example, one could draw isolines between temperature values recorded at individual weather stations across a country. [2] Because it is a field, at any given geographical point within that country or region, it will have a measurable temperature value. These values are then classified into groups (ex. 30-40°F, 40-50°F, 50-60°F, 60-70°F, 70-80°F, 80-90°F, 90-100°F, 100°F+) and undergo interpolation. Based on the method used, boundaries are drawn upon the map to represent zones in which the temperature is assumed to be the same and then color, value, or saturation is added to enhance the map. The visualization is derived from the original point data gathered by the weather stations. Common isarithmic maps are of temperature, rainfall, or elevation.

The advantages of creating an isarithmic map include the following: [3]

Isolines join all connected points of same value, whether measured or interpolated. There are many different types of isarithmic lines.

When reading an isarithmic map, you should pay attention to the zones that are in between the lines. While the lines indicate the general value across that interval, these zones should be seen as regions that are usually characterized by a value that is found between the values of the two bordering lines. The space between the lines of defined value allows the map reader to infer the change of value from one line to the next.

In this isopleth map, the divisions between the regions do not represent exact values.

Isarithmic mapping often uses control points or data for an event pulled from recorded data at certain locations. These control points have two types of data; the first known as true point data and the second known as conceptual point data. True point data is the actual value recorded at that location whereas conceptual point data is the information recorded over an area. [6] When points represent actual true data, the values represented by the isolines can be interpreted as exact. When the isolines represent a specific value (such as isolines representing elevation on a contour map), the map is called an isometric map. However, when data is areal, the isolines only approximate the change and cannot be interpreted as exact, the map is an isopleth map.

Often, the data for Isarithmic mapping is gathered from distributed sample points, leaving an absence of information between these locations. This is where interpolation is useful, because it allows for intermediate points to be assigned a value derived from the triangulation of existing control points. [7] Interpolation can only be used when dealing with isometric lines. An even gradient is assumed between lines, so the value halfway between two lines is equal to halfway between the two data values. The rate of change can be easily assessed on both isometric and isoplethic maps. Lines that are closely spaced have a severe gradient while lines that are far apart have a more gradual gradient. [8]

A few well known methods of interpolation are: [9] 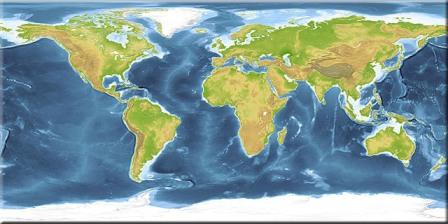 A continuous-tone map. Notice the color of the ocean floor. The blue gets lighter as the elevation gets higher. There are no isolines but the tones change as elevation increases.[10]

Continuous-tone maps are unclassed isarithmic maps, in which each point is shaded with a gray tone or color proportional to the value of the surface at that point. Continuous-tone maps are valuable for showing subtle variations in a geographic pattern but can be difficult to interpret because it is difficult to associate values in the legend with specific locations on the map. [11]

Continuous-tone maps differ from classified isarithmic maps because they do not use isolines. As noted, changes in the value of the data are depicted by a change in the value of the color chosen for its symbol rather than by isolines depicting classes or regions of data. The user does not need to interpolate values between the isolines, providing a more accurate map. Research has shown that color-based continuous-tone maps are easier to interpret than gray tone maps. [12] Typically, continuous tone maps are used to show elevation, heat, population, and other variables that are preferably shown without specific categories. This helps avoid the ecological fallacy.