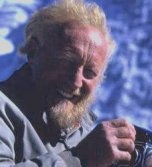 Jack D. Ives, Professor, Ph.D. - Dr. Jack Ives is a graduate of University of Nottingham, UK (B.A. Geography, 1953) and McGill University, Canada (Ph.D. 1956), Dr. Ives emigrated to Canada with his wife Pauline in 1954. Dubbed the "Father of Arctic and Alpine Geoecology" by a former student, Dr. Ives is currently Professor of Geography and Environmental Studies at Carleton University of Canada. From the Himalayas to Baffin Island, mountains and Arctic regions have been the subject of fascination in Dr. Ives academic career for half a century. He has been incessantly working to ensure the long-term livability of the mountain environments to whom he fell in love when he was 15. He has abiding passion for the mountain environment and the peoples who have been living on them for centuries. His quest to conserve the world’s mountain ecosystems has taken on a particular urgency with recent times.

Dr. Ives was Director of McGill Subarctic Research Lab., Schefferville, and Assistant Professor at Department of Geography, McGill University (1957-1960). He was Assistant Director and Director at Geographical Branch, Energy, Mines and Resources, Canada (1960-67). He then joined University of Colorado, USA as a Director of Institute of Arctic and Alpine Research (1967-1979) and Professor of Geography (1967-1989). He then moved to University of California, Davis as a Professor of Mountain Geoecology, Chair of Department of Geography (1989-1993) and Professor of Environmental Studies (1993-1997). During those years, he also was Chair of International Working Group, UNESCO MAB Programme (1973-1975), Research Coordinator of Project on Mountain Ecology and Sustainable Development at United Nations University (1978-2000) and Chair of Commission on Mountain Geoecology at International Geographical Union (1988-1996). Currently he is a Senior Advisor at Mountain Ecology and Sustainable Development.

With over 180 publications, scientific papers and books to his credit, and as a Founder and Editor (1968-1980) quarterly journal Arctic and Alpine Research, Founder and Editor (1980-2000) quarterly journal Mountain Research and Development, he is a well-known personality in the world. He has supervised over 50 Masters and PhD students and 18 Post-doctoral fellows - from China, Nepal, Bhutan, Thailand, and Ecuador.