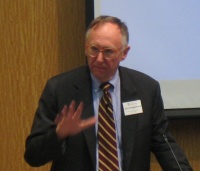 Dangermond has had a strong impact on the development of GIS methodologies, the GIS software market, GIS technology research and related analytical methods. He has received many awards reflecting the influence of his work, including: