Landsat 7, launched on April 15, 1999, is the latest satellite of the Landsat program. Landsat 7's primary goal is to refresh the global archive of satellite photos, providing up-to-date and cloud free images. Although the Landsat Program is managed by NASA, data from Landsat 7 is collected and distributed by the USGS. The World Wind project allows 3D images from Landsat 7 and other sources to be freely navigated and viewed from any angle. The satellite's companion, Earth Observing-1, trails one minute following the exact orbital characterists. 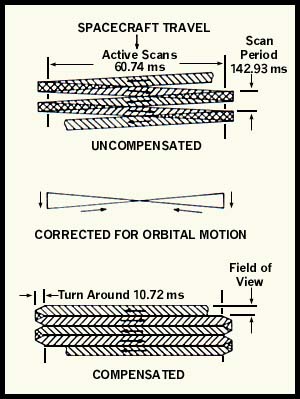 The effect of the SLC on ETM+ scans.

Landsat 7 was designed to last for five years, and has the capacity to collect and transmit up to 532 images per day. It is in a polar, sun-synchronous orbit, meaning it scans across the entire earth's surface. With an altitude of 705 kilometres +/- 5 kilometres, it takes 232 orbits, or 16 days, to do so. The satellite weighs 1973 kg, is 4.04 m long, and 2.74 m in diameter. Unlike its predecessors, Landsat 7 has a solid state memory of 378 gigabits (roughly 100 images). The main instrument on board Landsat 7 is the Enhanced Thematic Mapper Plus (ETM+).

On May 31, 2003 the Scan Line Corrector (SLC) in the ETM+ instrument failed. The SLC consists of a pair of small mirrors that rotate about an axis in tandem with the motion of the main ETM+ scan mirror. The purpose of the SLC is to compensate for the forward motion (along-track) of the spacecraft so that the resulting scans are aligned parallel to each other. Without the effects of the SLC, the instrument images the Earth in a "zig-zag" fashion, resulting in some areas that are imaged twice and others that are not imaged at all. The net effect is that approximately one-fourth of the data in a Landsat 7 scene is missing when acquired without a functional SLC.

Following the SLC failure, an Anomaly Response Team (ART) was assembled, consisting of representatives from the USGS, NASA, and Hughes Santa Barbara Remote Sensing (the manufacturer of the ETM+ instrument). The team assembled a list of possible failure scenarios, most of which pointed at a mechanical problem with the SLC itself. Since there is no backup SLC, a mechanical failure would indicate that the problem was permanent. However, the team was unable to rule out the possibility of an electrical failure, though such a possibility was deemed remote. Nevertheless, on September 3, 2003, USGS director Charles G. Groat authorized the Landsat project to reconfigure the ETM+ instrument and various other subsystems on board Landsat 7 to use the spacecraft's redundant ("Side-B") electrical harness.

With this authorization, the USGS flight operations team at the NASA Goddard Space Flight Center uploaded a series of commands to the spacecraft, instructing it to operate using the redundant electrical harness. This operation was successful, and on September 5, 2003, the ETM+ instrument was turned on and acquired data that was sent to the Landsat ground system at EROS outside of Sioux Falls, South Dakota. It was immediately apparent that the migration to the Side-B electrical harness had not fixed the problem with the SLC. Following this, the instrument was reconfigured to use its primary electrical harness. The subsequent conclusion of the ART was that the SLC problem was mechanical and permanent in nature.

Landsat 7 continues to acquire data in this mode. Data products are available with the missing data optionally filled in using other Landsat 7 data selected by the user. To continue the Landsat legacy, studies are underway to fly an equivalent scientific sensor on a new satellite towards the end of this decade. 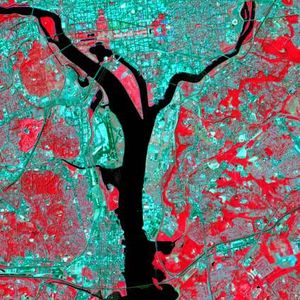 Largest parts of the earth surface displayed on web mapping services like Google Maps/Google Earth, MSN Maps or Yahoo Maps are based on enhanced and color balanced Landsat 7 imagery.