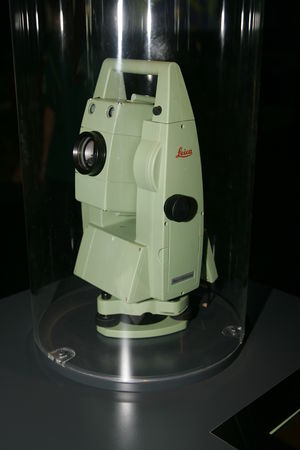 Leica Geosystems (formerly known as Wild Heerbrugg or just Wild) based in eastern Switzerland produces products and systems for surveying and geographical measurement (geomatics). Its products employ a variety of technologies including GPS satellite navigation and laser rangefinders to enable users to model existing structures, terrains in computer based systems to high accuracies, often under 1 cm.[2]

The brand Leica better known for its high quality cameras was formed on 2 April 1990 after the merger of several companies. The company was listed on the Swiss stock exchange until the 7 August 2006 which saw the cancellation of all publicly held registered shares in Leica Geosystems Holdings Ltd and delisting of all listed registered shares of a par value of CHF 50.[3]

Heinrich Wild (1877–1951) of Glarus, Switzerland, a leading designer of geodetic and astronomical instruments, began his career as an apprentice surveyor. In 1908, having invented a military rangefinder and convinced Zeiss to manufacture it, Wild moved to Jena and became head of GEO, the new Zeiss branch responsible for surveying instruments. Wild returned to Switzerland after the First World War.[4]

In April 1921, with the help of Swiss financiers, he founded the Heinrich Wild, Werkstätte für Feinmechanik und Optik in Heerbrugg, in the Rhine Valley, with Colonel Jacob Schmidheiny of Balgach and geologist Dr. Robert Helbling of Flums. In the early 1930s, having recognized that he was not cut out to be a factory manager, Wild moved to Zurich, severed his connections with the firm in Heerbrugg, and designed instruments for Kern & Co in Aarau. His old firm became Wild Heerbrugg in 1937.

It merged with the optical firm of Ernst Leitz of Wetzlar in 1987, acquired a majority interest in Kern in 1988, was renamed Wild Leitz AG in 1989, and became part of the Leica holding company in 1990. Starting in 1996, the company was divided gradually into smaller units. Thus in 1996, Leica Camera AG was founded, followed in October 1997 by Leica Geosystems AG, and on April 1, 1998 by Leica Microsystems AG. The Swedish company Hexagon AB purchased Leica Geosystems in late 2005.

Today these three companies are all independent public companies. Leica Geosystems produces - in continuation of Wild Heerbrugg - the geodetic instruments and is the global market leader in this section. The main customers of Leica Geosystems are surveyors, manufacturers and GIS companies.