Visible light is the portion of the electromagnetic spectrum that can be perceived by the human eye. It consists of the wavelengths ~400-500nm (blue light), ~500-600nm (green light), and ~600-700nm (red light). [1] When all these wavelengths are emitted at the same time it is considered white light, which can then be broken into it's constituent wavelengths by a prism via the process of refraction. This electromagnetic radiation is detected by the rods and cones in the eye and perceived as light. Rods enable scotopic vision, allowing sight in low levels of light. Perception of color, however, is possible through cones which are not functional in lower levels of light. This is why things tend to appear gray in low levels of light. 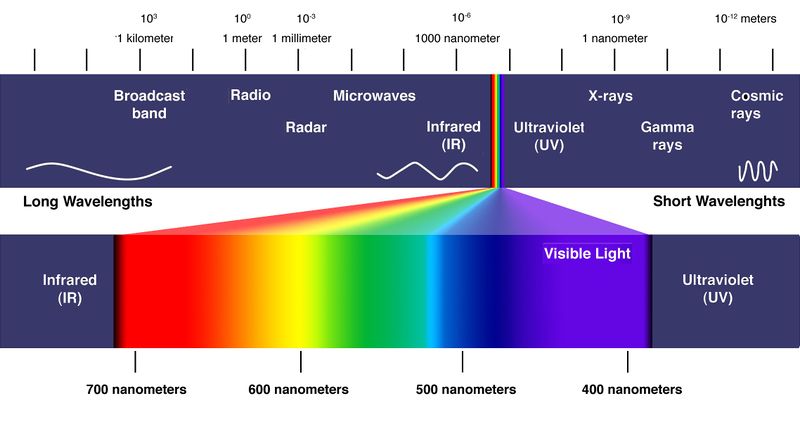 The human eye perceives color through cone cells in the eye. Three types of cones are sensitive to three different wavelengths that correspond with blue, green, and red light. [2] When white light reflects off of a "red" object, the green and blue wavelengths of light are absorbed, while the red wavelengths are reflected, the eye registers these wavelengths, and the brain interprets the result as "red." [3] This is known as subtractive color, and is the theory behind printed images. Projected images, such as those from a computer screen, follow the additive color theory. This theory states that red, green, and blue light mixed together produces white light. [4]