A line is one of three features with which most vector data is represented in GIS maps. The others are point and polygon.

A line is formed by connecting two data points. A computer reads this line as straight, and renders the line as a vector (vector: any quantity that has both magnitude and direction) connecting two x-y coordinates (X = longitude, Y = latitude). The more points used to create a line, the greater the detail. GIS software can be used to define one end of the line as the starting point and the other as the end point, giving the line "direction". [1]

Adding more vertices – or points – allows curvature to be displayed. The images below show the difference in detail between fewer and more vertices. 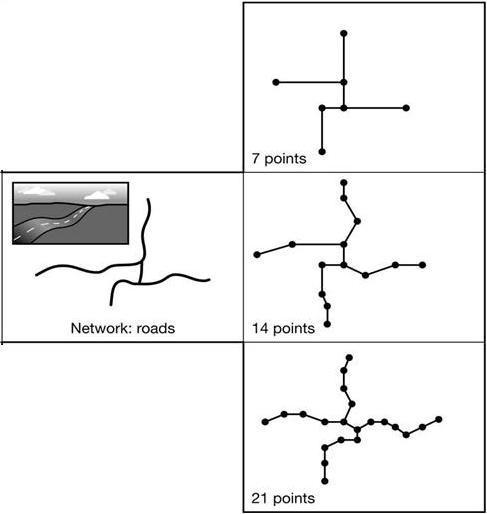 Each line is identified by the sequence of first and last point, together with the associated table attribute. In the image below, the three lines (a, b and c) have their first and last nodes identify their location. Each line also has attributes of flow and capacity. Each node has coordinates (X, Y) that are stored in another table.

Because the first and end node coordinates of each line is known, the length of a line or polyline (sequence of lines) can be easily computed. [2]

The default segment type is a straight line between two vertices, or points. However, when it is necessary to define curves or parametric shapes, then three additional segment types can be defined: circular arcs, elliptical arcs, and Bézier curves. These shapes are often used for representing built environments such as parcel boundaries and roadways.

A Bezier curve is a curved line whose shape is derived mathematically rather than by a series of connected vertices. In graphics programs, a Bézier curve usually has two endpoints and two handles that can be moved to change the direction and the steepness of the curve. Bézier curves are named for the French engineer Pierre Bézier (1910-1999). [3]

Linear feature vertices can also include m-values. Some GIS applications employ a linear measurement system used to interpolate distances along linear features, such as along roads, streams, and pipelines. You can assign an m-value to each vertex in a feature.

A commonly used example is a highway milepost measurement system used by departments of transportation for recording pavement conditions, speed limits, accident locations, and other incidents along highways. Two commonly used units of measure are milepost distance from a set location, such as a county line, and distance from a reference marker. [4]