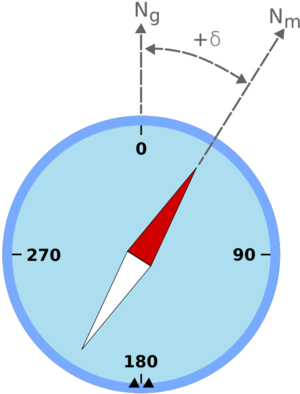 Example of magnetic declination showing a compass needle with a "positive" (or "easterly") variation from geographic north.

Change of declination in time and space

Magnetic declination varies both from place to place, and with the passage of time. As a traveller cruises the east coast of the United States, for example, the declination varies from 20 degrees west (in Maine) to zero (in Florida), to 10 degrees east (in Texas), meaning a compass adjusted at the beginning of the journey would have a true north error of over 30 degrees if not adjusted for the changing declination.

In most areas, the spatial variation reflects the irregularities of the flows deep in the earth; in some areas, deposits of iron ore or magnetite in the Earth's crust may contribute strongly to the declination. Similarly, secular changes to these flows result in slow changes to the field strength and direction at the same point on the Earth.

The magnetic declination in a given area will change slowly over time, possibly as much as 2-2.5 degrees every hundred years or so, depending upon how far from the magnetic poles it is. This may be insignificant to most travellers, but can be important if using magnetic bearings from old charts or metes (directions) in old deeds for locating places with any precision. Simply speaking, true north is the direction in which the north pole is located along the Earth's rotational axis.

On the other hand, magnetic north is the direction toward which the compass needle points.

There are three main ways of stating the declination for a given location:

Learning the declination for an area

Most use of declination is in conjunction with a map; as stated, that map may state (or even illustrate) the local declination. If not,

One would of course rather have the real declination than a prediction. However, a map is sure to be months or years out of date, whereas the model is built with all the information available to the map makers at the start of the five-year period it is prepared for. The model reflects a highly predictable rate of change, and will usually be more accurate than a map, and almost never less accurate. 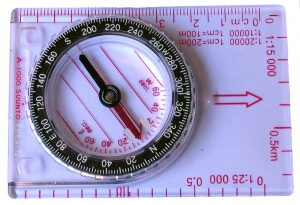 A magnetic compass points to magnetic north, NOT geographic north. Modern navigational compasses usually include a "baseplate" marked with a bezel that includes a graduated scale of degrees along with the four cardinal directions. Most advanced /pricier compasses include a declination adjustment. Such an adjustment moves the red "orienting arrow" (which can be found on the base of the liquid filled cylinder), and measures the angle by which it has been turned. Either the cylinder will have a mark to be read against the scale of degrees on the baseplate, or a separate scale will display the current adjustment in degrees. In either case, the underlying concept is that for a declination of 10° W, the red arrow on the cylinder must lie 10° E of 0°/N on the bezel. (Basically, in this case, you are permanently adding 10° to your future bearings to compensate for the -10° declination. If your declination was 10°E you would rotate the baseplate's orienting arrow 10° W of 0°/N to compensate for the +10° declination). In this sense, it can be said that the compass has been adjusted to indicate true north instead of magnetic north (as long as your travels are confined within an area that shares the same isogonic line).

With a compass lacking an adjustable baseplate, a careful, well-practiced, compass user can analyse the combination of declination and task, and decide whether the declination is to be added or subtracted from the known direction to determine an unknown direction.

In a place where the declination needs to be subtracted from an angle measured on a map from true north to a destination, to learn the compass reading to follow (on an unadjusted compass) to walk that course, the declination needs to be added to the compass reading that a landmark lies along, to learn the direction on the map to seek the name to match the landmark with.

In navigation the terminology of geomagnetism is used differently. In particular, magnetic declination is divided into two parts, namely magnetic variation and magnetic deviation. There are also three types of bearings—true, magnetic, and compass—which are related by the rules:

This relationship (finding what the compass should show when the true course is known) is frequently taught as:

If one knows the course shown by the compass and wishes to find the course relative to true north, the steps are inverted and the signs of deviation and variation inverted.

Magnetic variation is the difference between true bearings and magnetic bearings and is caused by the different locations of the Geographic North Pole and the Magnetic North Pole plus any local anomalies such as iron deposits. Variation is the same for all compasses in the same location and is usually stated on good quality maps and charts, along with the date it was measured.

Magnetic deviation is the difference between magnetic bearings and compass bearings. Deviation varies for every compass in the same location and depends on such factors as the magnetic field of the boat, wristwatches, etc. The value will also vary depending on the orientation of the boat. Magnets and/or iron masses can be used to correct for deviation so that a particular compass will accurately give magnetic bearings. More commonly, however, a correction card will be drawn up listing errors for the compass which can then be compensated for arithmetically.

Magnetic declination has a very important influence on air navigation, since the most simple aircraft navigation instruments are designed to determine headings by locating magnetic north through the use of a compass or similar magnetic device.

Aviation sectionals (maps / charts) and databases used for air navigation are based on True north rather than magnetic north, and the constant and significant slight changes in the actual location of magnetic north and local irregularities in the planet's magnetic field require that charts and databases be updated at least 2 times per year to reflect the current magnetic variation correction from True north. For example, near San Francisco, TRUE north is about 14.5 degrees less than magnetic north.

When plotting a course, a pilot in most small planes will plot a trip using true north on a sectional (map), then, convert the true north bearings to magnetic north for in-plane navigation use (which rely on cockpit instruments that read magnetic north).

Radionavigation aids located on the ground, such as VORs, are also checked and updated to keep them aligned with magnetic north to allow pilots to use their magnetic compasses for accurate and reliable in-plane navigation

GPS systems used for air navigation can use magnetic north or true north. In order to make them more compatible with systems that depend on magnetic north, magnetic north is often chosen, at the pilot's preference. The GPS receiver natively reads in true north, but can elegantly calculate magnetic north based on its true position and data tables calculate the current location and direction of the north magnetic pole and (potentially) any local variations, if the GPS is set to use magnetic compass readings. 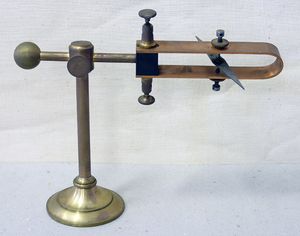