Map Layout is the assembling of the various elements of a map into a single whole, including the map itself, its legend, title, scale bars, and other elements. [1] Map symbolism can rarely stand alone to sufficiently depict all the necessary information that a map is trying to tell; additional explanation and context is usually needed. Their primary purpose is to give a place identity, orientation, subject matter, symbolization, etc. [2] This term usually refers to the combination of the map image with auxiliary elements; the assembling of the geographic symbols within the map image is called Map composition.

A map legend, or map key, is an explanation of the symbols or pictorial language and convention of the map. Legend content, design and placement are important because a map can fail to communicate its message if readers cannot determine what the symbols in the map are intended to represent. [1]" Not all symbols used on the map necessarily need to be included in the legend; Symbols that are intuitive, conventional, well-labeled, or unimportant may be left out with careful consideration. Maps with highly standardized symbology, such as street maps or topographic maps, may remove the legend altogether. 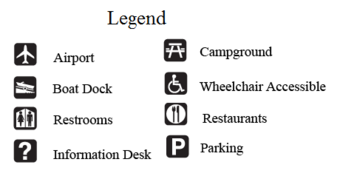 Though a title is short, give it lengthy thought.[4]

The title of the map gives the audience the contextual information that they need to use the map properly. The more the audience knows about the area the less information is required in the title, and the less the audience knows about the mapped area, the more information is required. Since the title is often the first part of a map that an audience notices, it is be important to have the title give the general idea that is being presented in an effective manner. Map titles are often made up of three parts: the geographic name, the layer name, and the indicator name. The geographic name is the base area that the map is showing and is essentially the main part of the title that shows us where in general the audience is looking. The layer name focuses on the overlying map layer and shows the audience what the information is they are looking at. The indicator name refers to the information or locations the map is indicating to the audience. For example in the title "Provo, UT, Theme Park Locations" is the geographic name showing the base location, "Theme Park" is the layer name, and "Locations" is the indicator name explaining that the map is showing the location of theme parks in Provo. 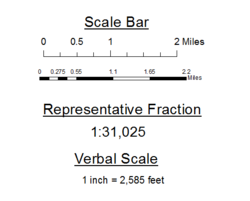 Inset maps are small maps projected onto the main map, which are used to depict an area of the map at a larger or smaller scale for a particular purpose. In this way, inset maps provide more information or context to the main map. Some of the uses for them include:

Balance is a principle of map layout, which seeks the harmonious organization of map elements and empty space that incorporates the concept of available space. Applying correct balancing techniques can greatly enhance the clarity of the map. The map elements in a well-designed map tend to complement one another, whereas those in a poorly designed map appear to compete for space, resulting in a lack of harmony.

Location, size, color and shape of an object in a map affect visual weight and direction. For example, an object in the upper part of a composition is heavier than those in the lower part, large objects appear visually heavier than small objects, and an object of regular shape appear heavier than irregularly shaped ones. [5] 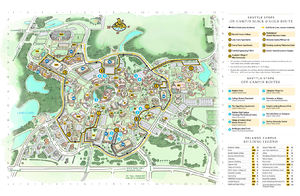 Example of how negative space can draw attention to the main part of map.