A map legend or key is a visual explanation of the symbols used on the map. It typically includes a sample of each symbol (point, line, or area), and a short description of what the symbol means. For example, a short segment of a blue sinuous line may be labeled 'rivers'. [1] Because map symbols’ meanings vary from region to region, a clear and concise legend is critical for conveying the distinctive characteristics of the map. [2]

The legend is a graphical representation of information, with design principles similar to a map or any other graphic. The only difference is that it is related to the information on the map it is connected to. Therefore, it is important to remember the layout design concepts such as harmony, visual balance, clarity, visual logic, logical groupings, and unambiguous references to create a legend that is effective in relation to the map. Creating a well laid out legend will enhance the overall gestalt of the maps visual appearance.

The legend should be simple and its position largely depends on the open space available in the map; a legend should be centered in an area of open space. It should be large enough that it is legible but small enough to stay low in the visual hierarchy.[3]

The legend is key here in order to understand the data that is being presented on the choropleth map. The legend, however, is very large and can be very distracting. It is able to fulfill its purpose of informing what the different colors mean, but it is higher on the visual hierarchy that the actual geographic area being looked at. 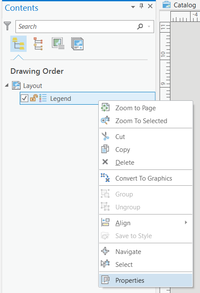 Once a legend is inserted in the layout, it is possible to access and edit the legend properties. Some of the elements available for the users to modify include the following: background, border, shadow, title, group layer name, headings, labels and descriptions. Within those elements it is possible to modify the size, spacing or color of the font, adjust columns and frame, and modify border width and color between others.[9].