Monte Carlo Simulation utilizes a sequence of algorithms that generate a number of random values. This simulation is a mathematical technique that helps in decision making and analysis. It can provide a decision-maker with a range of possible outcomes and the probabilities that may occur for a choice. The simulation can show the extreme possibilities, the middle-of-the-road decisions, and the conservative decisions. This technique is used by a wide variety of professionals from many fields like finance, insurance, transportation, and GIS. [1]

This process is useful when attempting to generate data, given some specific constraints; for example, mean and standard deviation. Monte Carlo methods can also produce random values to create a distribution if a current distribution is not known. These methods are generally used to provide test data for model simulations or other computerized calculations that require large amounts of values.[2]

The Monte Carlo methods were first used by Stan Ulam and Nicholas Metropolis in the 1940s. The Monte Carlo Simulation was named after the city in Monaco which was famous for its casino. Most of the games played involved repetitive events with known possibilities.[3] The development of the Monte Carlo Algorithm is difficult to isolate. Much of the early work was done with the development of the Atomic bomb, where this method was used to aid in physics and statistical simulations. Following the development, scientists in various fields recognized the usefulness of the random value generator and it became a widely accepted method of removing bias and introducing uncertainty in variable development.[2]

The Monte Carlo methods are a useful way to calculate the numerical value of an integral. However, these methods are most useful if they can represent the target distribution rather than a uniform distribution. This was made possible when Metropolis developed the Monte Carlo Markov Chain method. This method allows random samples to be generated in situations where the distribution is arbitrary and cannot be integrated. [4]

The Monte Carlo simulation can be especially useful for analyzing error within a GIS. This is necessary because a GIS cannot fully represent the real world. Thus, approximations are used (for example in DEM modeling) causing error to propagate through a model. Therefore, one can use the Monte Carlo method to simulate possible combinations of inputs and parameters in order to create a plausible scenario of the model with one’s data.[5]

Monte Carlo simulations can be useful in GIS when additional data points are needed to test a model or hypothesis. This process is often used to extrapolate data or generate more data points in a given range. This is often helpful when testing more complex models such as traffic demand models, network analysis models, and a variety of ecological/biological models.[citation needed]

Monte Carlo simulations can be used to understand error propagation in a slope map derived from a DEM. DEMs are approximations of elevation and have an associated uncertainty. Using Monte Carlo simulation a simulation of the uncertainty of the DEM can be created by adding a random number from the error probability distribution to each cell of the DEM. This process is repeated many times resulting in a collection of maps which can then be examined to see how error could be spread throughout the analysis. This error can be analyzed by comparing histograms or through other statistical measures. [6]

In order to implement a Monte Carlo simulation, the variables involved in a study must first be identified and their value ranges or discrete values established. A programmatic random selection tool is then used to choose a single value for each variable, which are then processed through a modeled formula. Having obtained this single result, the process is repeated thousands of times. The collection of results can then be statistically assessed and interpreted.

Say that the ideal biome/environment for a particular species of plant is being analyzed in terms of elevation, temperature, precipitation, soil texture, and sunlight type. The following process represents the application of a Monte Carlo simulation to determine the veracity of a developed model. 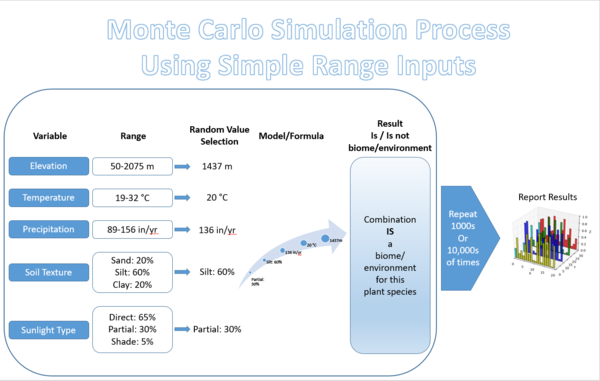 For higher quality results, especially when applied to risk analysis, probability distributions can be used for the inputs to the random selection process.[7]

This simulation falls under section AM7-7 of the GIS&T Body of Knowledge.