NAD83 is an acronym for North American Datum of 1983, a geocentric datum and geographic coordinate system based on the 1980 Geodetic Reference System ellipsoid (GRS80). Mainly used in North America, its measurements are obtained from both terrestrial and satellite data. NAD83 corrects some of the inherent distortions in the NAD27 survey network that have accumulated over time and distance. NAD83 also has the advantage of being the native datum used by modern satellite surveying technologies such as the Global Positioning System (GPS).[1]

The first realization of NAD83 was introduced in 1986 by a group of institutions representing the various North American countries to upgrade the previous reference system; that is, the North American Datum of 1927 or NAD27. In particular, the National Geodetic Survey (NGS) represented the United States, and this federal institution officially refers to the first NAD83 realization as NAD83 (1986). For this realization, the group of institutions relied heavily on Doppler satellite observations collected at a few hundred sites to estimate the location of the Earth’s center of mass and the orientation of the 3D cartesian axes.[2]

NAD83 is the national spatial reference system used for georeferencing by most federal and provincial agencies in Canada. The physical realization of this system has undergone several updates since it was first introduced in 1986. It has evolved from a traditional, ground-based horizontal control network to a space-based 3D realization fully supporting more modern positioning techniques and the integration of both horizontal and vertical reference systems. After a brief review of previous reference systems used in Canada, the original definition of NAD83 and its subsequent updates are described, focusing on the definition of the current implementation NAD83 (Canadian Spatial Reference System, CSRS) and its relationship with other reference systems. Official transformation parameters between NAD83 (CSRS) and the International Terrestrial Reference Frame (including WGS84) are provided for use throughout Canada. Possible future reference systems for Canada and North America are also examined.[3] 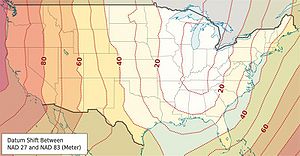 Converting from NAD27 to NAD83 means changing the coordinates for all features on, over or below the ground; the amount by which they are changed depends on the location of the feature. It is important to note that a conversion from NAD27 to NAD83 does not affect vertical data; any conversion needs only be concerned with the horizontal positioning of the data. Errors can occur in spatial data because of a lack of datum information or incorrect information. It is impossible to correctly convert data from NAD27 to NAD83 if information about the location of a feature is missing or incorrect. Furthermore, it is not possible to simply examine the coordinate values for a feature as two points many metres apart may have the same coordinate values if different datums are used. Finally, any conversion from NAD27 to NAD83 will not result in the movement of survey monuments, land lease agreement boundaries or any other physical feature. The only things that will change are the coordinate values used to describe a real world location. This means that certain legal survey systems will no longer have blocks, sections or other land legal descriptions described using 'round' numbers of degrees and minutes.[5]

A point having a given latitude and longitude in NAD27 may be displaced on the order of many tens of meters from another point having the identical latitude and longitude in NAD83, so it is important to specify the datum along with the coordinates. The North American Datum of 1927 is defined by the latitude and longitude of an initial point (Meades Ranch in Kansas), the direction of a line between this point and a specified second point, and two dimensions that define the speroid. The North American Datum of 1983 is based on a newer defined spheroid (GRS 80); it is an Earth-centered (or "geocentric") datum having no initial point or initial direction.[6]

Looking into the future of NAD83, there is progress that significantly improves the accuracy of the geodetic control survey networks while still maintaining the same datum and reference frame. When the NAD83 reference frame was originally realized, every possible effort was made to keep it compatible with the WGS84 reference frame used by the Global Positioning System, the surveying technique destined to prevail in the future. Origin, orientation, and the GRS80 ellipsoid all came from the same sources as those used by the U.S. Defense Mapping Agency (DMA - now the National Imagery and Mapping Agency, or NIMA) for WGS84. The two reference frames were essentially equivalent at that time, but there has been no development of WGS84 into a tangible network with published coordinates for accessible monumented points. Instead, WGS84 is the reference frame for the tracking network and the broadcast orbits of the GPS satellites.[7]