From wiki.gis.com
Jump to: navigation, search
For other uses, see Nadir (disambiguation). 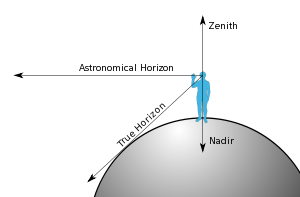 Diagram showing the relationship between the Zenith, the Nadir, and different types of Horizon. Note how the Nadir is opposite the Zenith.

The nadir (from Arabic نظير nathir, "opposite") is the direction pointing directly below a particular location; that is, it is one of two vertical directions at the location, orthogonal to a horizontal flat surface there. Since the concept of being below is itself somewhat vague, scientists define the nadir in more rigorous terms. Specifically, in astronomy, geophysics and related sciences (e.g., meteorology), the nadir at a given point is the local vertical direction pointing in the direction of the force of gravity at that location. The direction opposite of the nadir is the zenith.

Nadir also refers to the downward-facing viewing geometry of an orbiting satellite[1], such as is employed during remote sensing of the atmosphere, as well as when an astronaut faces the Earth while performing an EVA.

The word is also used figuratively to mean the lowest point of a person's spirits. [2]

The term nadir can also be used to represent the lowest point reached by a celestial body during its apparent orbit around a given point of observation. This can be used to describe the location of the Sun, but it is only technically accurate for one latitude at a time and only possible at the low latitudes. The sun is said to be at the nadir at a location when it is at the zenith at the location's antipode.