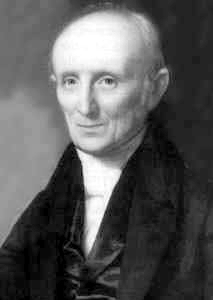 Nathaniel Bowditch (March 26, 1773 – March 16, 1838) was an early American mathematician remembered for his work on ocean navigation. He is often credited as the founder of modern maritime navigation; his book The New American Practical Navigator, first published in 1802, is still carried on board every commissioned U.S. Naval vessel.

Nathaniel Bowditch, the fourth of seven Bowditch children, was born in Salem, Massachusetts. At the age of ten, he left school to work in his father's cooperage, before becoming indentured at age twelve for nine years as a bookkeeping apprentice to a ship chandler.

In 1787, aged fourteen, Bowditch began to study algebra and two years later he taught himself calculus. He also taught himself Latin in 1790 and French in 1792 so he was able to read mathematical works such as Isaac Newton's Philosophiae Naturalis Principia Mathematica. He found thousands of errors in John Hamilton Moore's The New Practical Navigator; at eighteen, he copied all the mathematical papers he found in the Transactions of the Royal Society of London. Among his many significant scientific contributions would be a translation of Pierre-Simon de Laplace's Mécanique céleste, a lengthy work on mathematics and theoretical astronomy.

Serendipity aided Bowditch's self-directed study, in as much as he found himself able to use the eminent Irish chemist Richard Kirwan's library: a privateer from Salem had intercepted the ship carrying the library between Ireland and England and brought the library back to Salem in June 1791.

In 1795, Bowditch went to sea on the first of four voyages as a ship's clerk and captain's writer. His fifth voyage was as master and part owner of a ship. Following this voyage, he returned to Salem in 1803 to resume his mathematical studies and enter the insurance business. (One of his family homes in Salem, the Nathaniel Bowditch House, still exists and has recently been restored.)

In 1804, Bowditch became America's first insurance actuary as president of the Essex Fire and Marine Insurance Company in Salem. Under his direction, the Company prospered despite difficult political conditions and the War of 1812.

Bowditch's mathematical and astronomical work during this time earned him a significant standing, including election to the American Academy of Arts and Sciences in 1799 and the American Philosophical Society in 1809. He was offered the chair of mathematics and physics at Harvard in 1806, but turned it down. In 1804, an article on his observations of the Moon was published and in 1806 he published naval charts of several harbors, including Salem. More scientific publications followed, including a study of a meteor explosion (1807), three papers on the orbits of comets (1815, 1818, 1820) and a study of the Lissajous figures created by the motion of a pendulum suspended from two points (1815).

Bowditch's translation of the first four volumes of Laplace's Traité de mécanique céleste was completed by 1818. Publication of the work, however, was delayed for many years, most likely due to cost. Nonetheless, he continued to work on it with the assistance of Benjamin Peirce, adding commentaries that doubled its length.

By 1819, Bowditch's international reputation had grown to the extent that he was elected as a member of the Royal Societies of Edinburgh and London and the Royal Irish Academy.

In 1823, Bowditch left the Essex Fire and Marine Insurance Company to become an actuary for the Massachusetts Hospital Life Insurance Company in Boston. There he served as a "money manager" (an investment manager) for wealthy individuals who made their fortunes at sea, directing their wealth toward manufacturing. Towns such as Lowell, Massachusetts prospered as a result.

Bowditch's move from Salem to Boston involved the transfer of over 2,500 books, 100 maps and charts and 29 volumes of his own manuscripts.

During his time at sea, Bowditch became intensely interested in the mathematics involved in celestial navigation. He worked initially with John Hamilton Moore's London-published "Navigator", which was known to have errors. To have exact tables to work from, Bowditch recomputed all of Moore's tables, and rearranged and expanded the work. He contacted the US publisher of the work, Edmund Blunt, who asked him to correct and revise the third edition on his fifth voyage. The task was so extensive that Bowditch decided to write his own book, and to "put down in the book nothing I can't teach the crew." On that trip, it is said that every man of the crew of 12, including the ship's cook, became competent to take and calculate lunar observations and to plot the correct position of the ship.

Frontispiece of the 1802 first edition of The American Practical Navigator.
In 1802 Mr. Blunt published the first edition of Bowditch's American Practical Navigator, which became the western hemisphere shipping industry standard for the next century and a half. The text included several solutions to the spherical triangle problem that were new, as well as extensive formulae and tables for navigation. In 1866, the United States Hydrographic Office purchased the copyright and since that time the book has been in continuous publication, with regular revisions to keep it current. Bowditch's influence on the American Practical Navigator was so profound that to this day mariners refer to it simply as Bowditch. 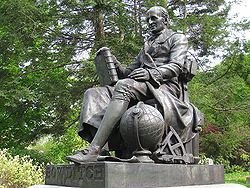 Bowditch died in Boston in 1838 from stomach cancer. He is buried in Mount Auburn Cemetery, where a monument to him was erected through public collections.

The statue was the first life size bronze to be cast in America and was the creation of renowned sculptor, Robert Ball Hughes.

The following eulogy was written by the Salem Marine Society:

The Oceanographic Survey Ship USNS Bowditch and the Nathaniel Bowditch, a high-speed catamaran passenger ferry serving downtown Boston and Salem,[1] were named for him, as was a lunar crater.

In 1955, a book for younger readers, Carry On, Mr. Bowditch, was published, portraying Bowditch's life dramatized and fictionalized. A serious modern biography is Robert E. Berry's Yankee Stargazer published in 1941.

Two middle schools and a dormitory in America were also named for him, in Foster City, California (Bowditch Middle School), Salem, Massachusetts and Salem State College, respectively. The Department of Marine Transportation building on the grounds of the United States Merchant Marine Academy is named in his honor and houses classrooms, laboratories, and the 900-seat Ackerman Auditorium. He also gives his name to a street in Berkeley, California.