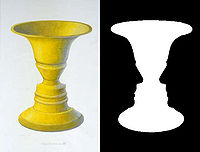 Rubin's vase is an optical illusion in which the negative space around the vase forms the silhouettes of two faces in profile, a well-known example of figure-ground reversal. 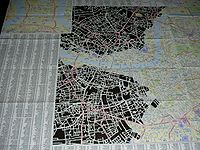 Charlotte, NC-based artist Karen O'Leary re-imagines the map as an exchange of negative and positive space. Deftly cutting maps of New York, Paris and London with razor precision, she leaves delicate webs of streets as land and water are cut away. Negative space demarcates land while meandering grids of paper represent streets [2]

Negative space in cartography can attract viewers to or distract viewers from what is portrayed. A map should be able to use negative space to enhance not just one aspect of a map, but all the information that is referenced throughout the map design. "Training users to question the negative space of cartographic information are the sorts of questions that rarely, if ever, come up in GIS production. These negative spaces, however, are not empty - they are full of social and environmental features that may or may not directly have anything to do with what is being put on the map" [3]. Negative space is an important part of the design of maps. It is better to have negative space than to fill it with useless or irrelevant data. “What a map does not include has an equal weight in the map's message as what the map actually describes. Sometimes the empty spaces on a map indicate a lack of knowledge, but they are also often the expression of particular worldviews.” [4]

It is often thought that map content and the negative space on the map are two separate and independent regions. However, negative space within the map content may also need consideration. One example that is often seen is when the name of a place crosses over that of a road or river. One must be aware of the negative space that the "halo effect" has on the feature, obscuring part of the original feature. While space constraints may make this necessary, one must be aware of the effect it can have on the map.

Additionally, cartographers sometimes confuse the idea of negative space with the concept of figure- ground contrast, since both deal with areas considered "empty" or unimportant to the map's purpose. However, these two concepts are distinct and have important implications for cartography so it is necessary to emphasize their differences. Figure-ground contrast deals with the idea of distinguishing the important message of the map from the less important, background data. [5] It is mainly concerned with the visual hierarchy of information, and facilitating the ability of the map reader to distinguish the most important layer(s) from the least important reference layer(s) based on the map's purpose. Negative space, on the other hand, is the "empty" space between multiple important map elements, or the 'features of interest.' [6] Negative space, as stated above, is not considered the background of the map, and actually assists in conveying the map's message. Negative space, therefore, is concerned with differentiating important features from other important features, rather than distinguishing an overall grouping of important map elements from less important or unimportant elements, as is the case with figure-ground contrast. 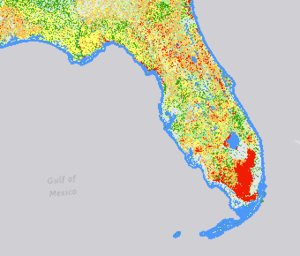 This map shows ocean as a negative space. It is a map of the potential hazard for wildfires in Florida.
On a map where the focus is the land, the water can be presented as negative space so that the land is emphasized and not dominated by water. Negative space used to represent water will add relief to the land. To differentiate the land from the negative space, a gradient can be used along the shoreline. The negative space should look like an extension of the frame as well so it blends more into the background [7].

Spreading out large labels in the negative space will help balance it with the focus of the map. A large portion of negative space may be utilized by filling it with other map elements such as a legend, scale bar, or title so this space does not overwhelm the main purpose of the map.

Negative space may also be important to consider within text. Though the text of a map may not be the focus, the negative space around the text must be examined so that it does not make other features or labels difficult to read or understand. When text and labels are in the negative space they should be arranged in such a way that they highlight the focus of the map.

One simple example of how negative space makes map elements more discernible is through typographic use of uppercase and lowercase. If all caps are used to label a map the words become increasingly more difficult to decipher. That would be due to the close similarity of space taken up by each letter without the advantage of negative space. The negative space present when using lowercase letters within a word allows for the eye to chart a learned pattern which makes writing more legible. Thus words can be read as a block rather than each letter being visualized individually. Also as a general rule of design having the positive and negative spaces in nearly equal proportions allows for the eye to rest more easily on the subject without distraction.