From wiki.gis.com
(Redirected from Network analysis)
Jump to: navigation, search 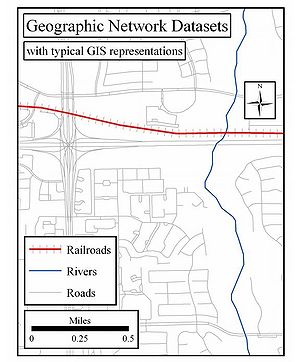 Network Analysis in GIS is based on the mathematical sub-disciplines of graph theory and topology. Any network consists of a set of connected vertices and edges. Graph theory describes, measures, and compares graphs or networks. Topological properties of networks are: connectivity, adjacency, and incidence. These properties serve as a basis for analysis.[1] A simple example of a network in GIS can be streets, power lines, or city centerlines.

GIS networks consist of interconnected lines (known as edges) and intersections (known as junctions) that represent routes upon which people, goods, etc. can travel.[2] The object traversing the network follows the edges, and junctions appear when at least two edges intersect.[3] Junctions and edges can have certain attributes affixed to them that increase the cost of traveling in the network, known as impedance. For example, a road network can have speed limits attached to the edges, and a junction can prevent left turns.[4]

Types of networks that can be modeled in GIS 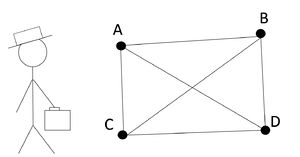 This shows a graphic of how the traveling salesman problem is displayed. The salesperson must find the shortest route that leads to each of the four points.

It's possible to perform analyses of movement within networks on GIS. These networks include: 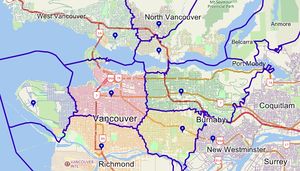 The streets in this map were partitioned into zones based on the driving time to the nearest service point. No matter where you are in any of the zones, the point that is the shortest drive-time away is the one located within that zone. See: http://www.caliper.com/glossary/what-is-network-partitioning.htm

One common type of network analysis is finding the shortest path between two points. In a network of streets, the "shortest" route can either refer to different variables, such as: distance, time, and monetary cost (such as purchasing a plane ticket). An ambulance driver looking for the shortest path to his destination will travel the route that will get him or her from point A to point B in the least amount of time.[7]

The traveling salesman problem is defined as reaching every point in a network in the most efficient way possible. It is derived from the idea of a salesperson trying to reach a planned set of cities to sell his or her product in the quickest, most efficient way possible, either through money made, or time. UPS uses a traveling salesman algorithm to efficiently deliver as many packages as possible to their customers every day.[8]

Network partition is a divvying up of regions in a network to zones or subcategories.[9] These regions are sized based on proximity to specific points in a network. This is common for fire stations in metropolitan areas.

Basic functions already existing in GIS including buffer, overlay, query, etc. are useful in Transportation Planning. However, deeper analysis of network data is available for planning applications. Examples of such higher uses include network flow equilibrium models, travel demand models, trip generation and distribution, as well as activity-based models and transportation/land-use interaction models. The latter use is particularly useful as demand for transportation influences land use, and reciprocally, the changed land-use's influence on transportation. Limited commercial software exists to perform such tasks, nevertheless, skilled programmers should be able design programs to perform these tasks where software is inaccessible or non-existent. See link #1 below for more information on Transportation and GIS.

In order for you to perform a network analysis in a GIS program, there are basic steps you need to take [10]. This section walks through the general procedure to do before you solve network analysis network problems:

Adding a Dataset to Your GIS Program

Before you are able to perform a network analysis, you need to create a dataset network in which you can perform an analysis. If there is not one available, the original reference source has been modified or has been changed, you will need to build a new one.

This step has us add features, or objects, to our dataset input. Network analysis objects are features and records used as input and output during network analysis. [13]These objects can include barriers, routes, facilities, or other man-made structures that will influence the end analysis. When you add these objects, setting the properties for the network analysis layer will further define the function of the input. [14]

1. More on Transportation and GIS - https://people.hofstra.edu/geotrans/eng/methods/ch1m4en.html