A Network dataset is a GIS dataset that is designed to support network analysis. It typically consists of lines representing the routes of flow in the network, augmented with other features (such as junction points), topology, and attributes that model network-relevant properties such as impedance and capacity of flow. Network datasets are well suited to model transportation networks [1]. With a network dataset, travel is typically allowed in two directions, whereas with a Geometric network, travel can only take place in one direction at a time. 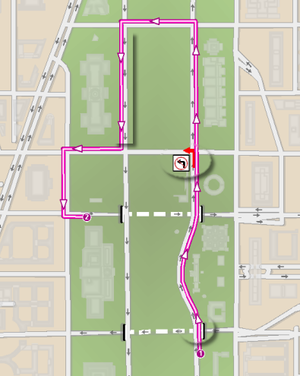 In the graphic to the right, a network dataset models the street network. The graphic highlights that one-way streets, turn restrictions, and overpasses/tunnels can be modeled. The analyses that are performed on the network, such as the route from stop 1 to stop 2, respect these and other network dataset properties [2].

For features in network datasets, connectivity rules (topology) are important. In a normal GIS layer, line features are generally unrelated to each other and have few, if any, rules regarding their connectivity. For example, if two line features intersect, neither line is aware of the other. Similarly, a point feature at the end of a line feature doesn't have any inherent information that lets it know about the line. Therefore, topology is a key element in a network dataset due to the need to understand relationships between features for network analysis [3]. Consider underpass and overpass line features in a GIS. The GIS does not inherently know that one line goes under the other in the real world. Topology would therefore dictate this relationship and disallow a turn going from the underpass to the overpass and vice versa [4].

When you perform an analysis using ArcGIS Network Analyst, the analysis always happens on a network dataset.