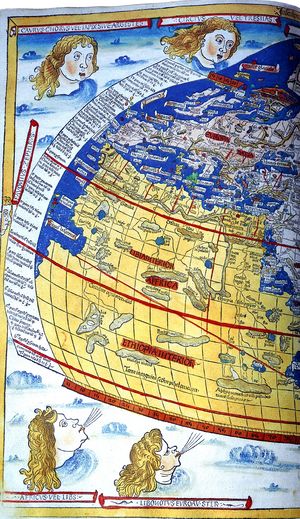 The places and dates of his birth and death as well as his exact name are unknown. He is also called "Donis", "Donnus", "Donmus" or "Donus", abbreviated forms of "Dominus".[1] and is sometimes referred to as a monk of the Benedictine order[2] possibly from Reichenbach Priory (Baden-Württemberg).[3]

In 1477, two years after the opening of the Vatican library, Germanus created a globe each for earth and sky, for which he was paid 200 Dukaten on 11 December 1477 according to a receipt[4]. An additional 3 Dukaten were paid the next day for the adding of the papal coat of arms, and 4 more on 20 December for two covers. The globes are listed in an inventory of 1481. The marchesa of Mantua, Isabella, asked for copies in 1505 (Intendiamo, che ne la libraria dil papa sono due spere solide: In una è depicto el Mapamundo, in l'altra li Signi Celesti, cio è el Zodiaco [...])

The globes were kept in Salle Pontifica (Magna Secreta) until they were lost in the Sacco di Roma of 1527. The earth globe of Germanus is considered the first modern globe to be documented. During production, he invented the "Donis" map projection, in which parallels of latitude are made equidistant, but meridians converge toward the poles.

This German engineer, inventor or industrial designer biographical article is a stub. You can help wiki.gis.com by expanding it.
Retrieved from "http://wiki.gis.com/wiki/index.php?title=Nicolaus_Germanus&oldid=740341"
Categories: