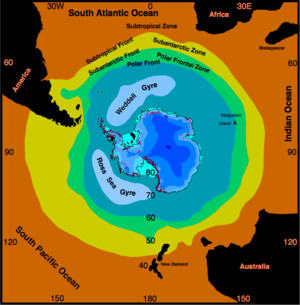 Oceanography (compound of the Greek words ωκεανός meaning "ocean" and γϝάφω meaning "to write"), also called oceanology or marine science, is the branch of science that studies the ocean. It covers a wide range of topics, including marine organisms and ecosystem dynamics; ocean currents, waves, and geophysical fluid dynamics; plate tectonics and the geology of the sea floor; and fluxes of various chemical substances and physical properties within the ocean and across its boundaries. These diverse topics reflect multiple disciplines that oceanographers blend to further knowledge of the world ocean and understanding of processes within it: biology, chemistry, geology, meteorology, and physics.

The study of oceanography is divided into a number of branches:

These branches reflect the fact that many oceanographers are first trained in the exact sciences or mathematics and then focus on applying their interdisciplinary knowledge, skills and abilities to oceanography.[1]

Data derived from the work of Oceanographers is used in marine engineering, in the design and building of oil platforms, ships, harbours, and other structures that allow us to use the ocean safely.[2] 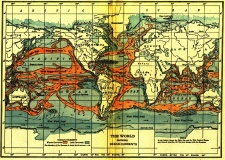 Man first began to acquire knowledge of the waves and currents of the seas and oceans in pre-historic times. Observations on tides are recorded by Aristotle and Strabo. Early modern exploration of the oceans was primarily for cartography and mainly limited to its surfaces and of the creatures that fishermen brought up in nets, though depth soundings by lead line were taken. But when Louis Antoine de Bougainville, who voyaged between 1766 and 1769, and James Cook, who voyaged from 1768 to 1779, carried out their explorations in the South Pacific, information on the oceans themselves formed part of the reports.

James Rennell wrote the first scientific textbooks about currents in the Atlantic and Indian oceans during the late 18th and at the beginning of 19th century. Sir James Clark Ross took the first modern sounding in deep sea in 1840, and Charles Darwin published a paper on reefs and the formation of atolls as a result of the second voyage of HMS Beagle in 1831-6. Fitzroy published a report in four volumes of the three voyages of the Beagle.

The steep slope beyond the continental shelves was not discovered until 1849. Matthew Fontaine Maury's Physical Geography of the Sea, 1855 was the first textbook of oceanography. The first successful laying of transatlantic telegraph cable in August 1858 confirmed the presence of an underwater "telegraphic plateau" mid-ocean ridge.

After the middle of the 19th century, scientific societies were processing a flood of new terrestrial botanical and zoological information. European natural historians began to sense the lack of more than anecdotal knowledge of the oceans. In the 19th century Edward Forbes undertook dredging in the Aegean Sea that founded marine ecology.

In 1871, under the recommendations of the Royal Society of London, the British government sponsored an expedition to explore world's oceans and conduct scientific investigations. With that, oceanography began as a quantifiable science in 1872, when the Scots Charles Wyville Thompson and Sir John Murray launched the Challenger expedition (1872–1876). The results of this were published in 50 volumes covering biological, physical and geological aspects. 4417 new species were discovered.

Other European and American nations also sent out scientific expeditions (as did private individuals and institutions). The first purpose built oceanographic ship, the "Albatros" was built in 1882. The four-month 1910 North Atlantic expedition headed by Sir John Murray and Johan Hjort was at that time the most ambitious research oceanographic and marine zoological project ever, and led to the classic 1912 book The Depths of the Ocean.

Oceanographic institutes dedicated to the study of oceanography were founded. In the United States, these included the Scripps Institution of Oceanography in 1892, Woods Hole Oceanographic Institution in 1930, Lamont-Doherty Earth Observatory at Columbia University, and the School of Oceanography at University of Washington. In Britain, there is a major research institution: National Oceanography Centre, Southampton which is the successor to the Institute of Oceanography. In Australia, CSIRO Marine and Atmospheric Research, known as CMAR, is a leading center. In 1921 the International Hydrographic Bureau (IHB) was formed in Monaco.

In 1893 Fridtjof Nansen allowed his ship "Fram" to be frozen in the Arctic ice. As a result he was able to obtain oceanographic data as well as meteorological and astronomical data. The first international organization of oceanography was created in 1902 as the International Council for the Exploration of the Sea.

The first acoustic measurement of sea depth was made in 1914. Between 1925 and 1927 the "Meteor" expedition gathered 70,000 ocean depth measurements using an echo sounder, surveying the Mid atlantic ridge. The Great Global Rift, running along the Mid Atlantic Ridge, was discovered by Maurice Ewing and Bruce Heezen in 1953 while the mountain range under the Arctic was found in 1954 by the Arctic Institute of the USSR. The theory of seafloor spreading was developed in 1960 by Harry Hammond Hess. The Ocean Drilling Project started in 1966. Deep sea vents were discovered in 1977 by John Corlis and Robert Ballard in the submersible "Alvin".

In the 1950s Auguste Piccard invented the bathyscape and used the "Trieste" to investigate the ocean's depths. The nuclear submarine Nautilus made the first journey under the ice to the North Pole in 1958. In 1962 there was the first deployment of FLIP (Floating Instrument Platform), a 355 foot spar buoy.

Then in 1966, the U.S. Congress created a National Council for Marine Resources and Engineering Development. NOAA was put in charge of exploring and studying all aspects of Oceanography in the USA. It also enabled the National Science Foundation to award Sea Grant College funding to multi-disciplinary researchers in the field of oceanography.

From the 1970s there has been much emphasis on the application of large scale computers to oceanography to allow numerical predictions of ocean conditions and as a part of overall environmental change prediction. An oceanographic buoy array was established in the Pacific to allow prediction of El Niño events.

1990 saw the start of the World Ocean Circulation Experiment (WOCE) which continued until 2002. Geosat seafloor mapping data became available in 1995.

The study of the oceans is intimately linked to understanding global climate changes, potential global warming and related biosphere concerns. The atmosphere and ocean are linked because of evaporation and precipitation as well as thermal flux (and solar insolation). Wind stress is a major driver of ocean currents while the ocean is a sink for atmospheric carbon dioxide.

Our planet is invested with two great oceans; one visible, the other invisible; one underfoot, the other overhead; one entirely envelopes it, the other covers about two thirds of its surface.

—Matthew F. Maury (1855) The Physical Geography of the Seas and Its Meteorology