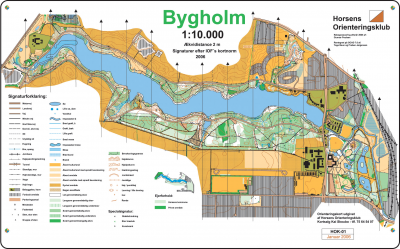 These maps are much more detailed than general-purpose topographic maps, and incorporate a standard symbology that is designed to be useful to anyone, regardless of native language. In addition to indicating the topography of the terrain with contour lines, orienteering maps also show forest density, water features, clearings, trails and roads, earthen banks and rock walls, ditches, wells and pits, fences and power lines, buildings, boulders, and other features of the terrain. Orienteering maps are 1:15 000 or 1:10 000 scale.[1] 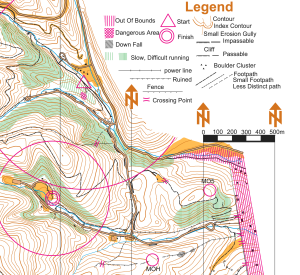 An orienteering map, and a compass, are the primary aids for the competitor to complete an orienteering course of control points as quickly as possible.[2] A map that is reliable and accurate is essential so that a course can be provided which will test the navigational skills of the competitor. The map also needs to be relevant to the needs of the competitor showing the terrain in neither too much nor too little detail.

Because the competition must test the navigational skills of the competitor, areas are sought which have a terrain that is rich in usable features. In addition, the area should be attractive and interesting. Notable examples in the US include Pawtuckaway State Park, New Hampshire and Valles Caldera, New Mexico, both having many boulders and boulder fields, and a wide variety of other terrain types.

Cartographer Jan Martin Larsen was a pioneer in the development of the specialized orienteering map.

The map scale is 1:15 000, with a permitted enlargement to 1:10 000 (with symbols at 150%). Other map scales may be provided for various purposes. The map is printed in five colours[2], which cover the main groups: Land forms, rock and boulders, water and marsh, vegetation, and man-made features. There are additional specifications for technical symbols, and an extra colour for overprinting symbols. The symbols used should be explained in a legend.[2]

Two technical symbols are required on all maps: Magnetic north lines printed in blue, and register crosses (these show that the printed colours are coincident).[2]

Other information is required to be on the printed map although the presentation is not specified, e.g. scale, contour interval and scale bar. Good practice requires information such as date of survey, survey scale, copyright information, and proper credit for the people who produced the map (surveyor, cartographer).

Symbols are specified so that a course can be overprinted on the map. It includes symbols for the start, control points, control numbers, lines between control points, and finish. Extra symbols are available so that information relating to that event may be shown e.g. crossing points, forbidden route, first aid post, and refreshment point etc. These are not permanent features and cannot be included when the map is printed.

The mapping process has four main stages: base map, field-work, drawing, and printing.

The base map can be a topographic map made for other purposes e.g. mapping from the National Mapping Agency, or a photogrammetric plot produced from an aerial survey.

Cartographers use a projection to project the curved surface of the earth onto a flat surface. This generates a grid that is used as a base for national topographic mapping. The projection introduces a distortion so that grid north differs from true north; magnetic north is a natural feature that differs from both. As an example: at 52° 35' N 1° 10' E (approx 7 km west of Norwich, England) true north is 2° 33' west of grid north, and magnetic north is about 7° west of grid north. Magnetic north varies continually and in this example (1986) was reducing by about ½° in four years.[3] Orienteering maps are printed using magnetic north and this requires an adjustment to be made to the base map.

Field-work is carried out using a small part of the base map fixed to a survey board, covered with a piece of draughting film, and drawn with pencils. The final map needs to be drawn with sufficient accuracy so that a feature shown on the map can be identified clearly on the ground by the competitor, thus, field-workers need to locate features with a high level of accuracy, to ensure consistency between map and terrain. Where the map and terrain are inconsistent, the feature becomes unusable: no control point can be placed there. Periodic corrections to the map may be necessary, typically vegetation changes in forested areas.

The earliest orienteering maps used existing topographic maps e.g. United Kingdom Ordnance Survey 1:25 000 plans. These were cut down to a suitable size, corrected by hand, and then copied.

These were initially drawn by hand on tracing paper using one sheet for each of the five colours; the various dot or line screens being added using dry transfer screens, for example Letratone manufactured by Letraset in the UK. The map was drawn at twice final map scale, and photographically reduced to produce the five film positives for printing. This was a simple process that required very few specialist tools. Draughting film has replaced tracing paper. This is a plastic waterproof material etched on one side so that the ink will hold.

This is the standard process used by National Mapping Agencies. It uses a plastic film, which is coated on one side with a photo-opaque film. The layer is removed with a scribing tool or scalpel to produce a negative image. One sheet of film is needed for each solid colour, and one for each screen, usually requiring about ten sheets of film altogether. The map is drawn at final map scale, and the negatives are printed with high quality dot screens to produce the five film positives for printing. The process makes it easy to produce high quality maps, but it does require a number of specialist tools.

Colour maps were sent to commercial printers for printing in five colours, with the overprinting being added after the map had been printed. This process was chosen as it gave a higher quality for the fine line-work than the industry standard four-colour process (CMYK). As computer and software technology has advanced, and the cost reduced, many clubs are now in a position to print their own maps. This enables clubs to print the six colours together (map and overprinting symbols) using that same four-colour process, but with a reduction in quality over traditional printing. Printing costs can be minimised by using standard stock sizes of paper e.g. A4 or Letter. It is important to use the correct type of paper: both the weight and the coating affect the usability of the final map.

Map accuracy refers to the work of the surveyor (field-worker) and relates not so much to the positional accuracy of the survey but rather to its utility for the competitor. Map quality refers to the quality of the artwork. Many national bodies have a competition in which awards are made to cartographers after assessment by a national panel. It is generally agreed by cartographers that the quality of the artwork depends on the skills of the cartographer rather than on the tools.[4]