Data analyses in Origin include statistics, signal processing, curve fitting and peak analysis. Origin's curve fitting is performed by the nonlinear least squares fitter which is based on the Levenberg–Marquardt algorithm (LMA).

There is also a built-in query tool for accessing database data via ADO. 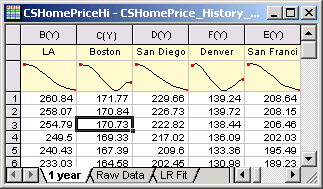 Origin Workbook with sparklines above data columns, this allows a quick glance of the data without plotting them.

Origin is primarily a GUI software with a spreadsheet front end. Unlike popular spreadsheet like Excel, Origin's worksheet is column oriented, such that each column has associated attributes like name, units and other user definable labels. Instead of cell formula, Origin uses column formula for calculations.

Origin also has a scripting language (LabTalk) for controlling the software, which can be extended using a built-in C/C++-based compiled language (Origin C).

Note that Origin can be also used as a COM server from the program which might be written in VB.NET, C#, LabVIEW etc.

Origin was first created for use solely with microcalorimeters manufactured by MicroCal Inc. The software was used to graph the instruments data, and perform nonlinear curve fitting and parameter calculation.

The software was first published for the public in 1992 by Microcal Software, which later was renamed to OriginLab Corporation[2], located in Northampton, Massachusetts.