An image from a part of a digital orthophoto quadrangle of Washington, DC

Orthophotographs are commonly used in the creation of a Geographic Information System (GIS). Software can display the orthophoto and allow an operator to digitize or place linework, text annotations or geographic symbols (such as hospitals, schools, and fire stations). Some software can process the orthophoto and produce the linework automatically. 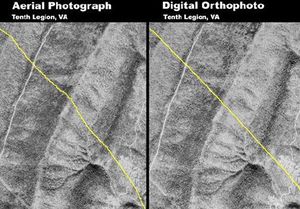 An orthophoto is an aerial photograph planimetrically corrected. Orthophotographs have the positive attributes of a photograph such as detail and timely coverage, and the positive attributes of a map including uniform scale and true geometry. This enables orthophotographs to be used in their primary role as a backdrop on which map features can be overlaid. Orthophotos represent the primary use of remote sensing imagery.

Orthophotos are now created by scanning aerial photographs and converting them into a raster image file format. A digital terrain model is added as a means of collecting ground points to indicate the changes in elevation. When control points are identified on the aerial photos, stereo models are developed and geometric distortions are estimated. The image is rectified and georeferenced using mathematical models of photogrammetry to remove tilt, terrain, atmospheric and other digital image distortions. 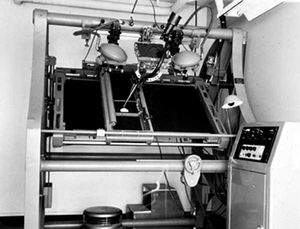 In 1955, Russell Bean of the Topographic Branch of the U.S. Geological Survey invented the orthophotoscope, which was initially used to make orthophotographs for use by geologists of the same agency. It was the first orthophotoscope used to produce orthophotoquads — rectified air photos. The T-64 model was a modified Kelsh analog stereoplotter that profiled the stereo model while the operator manually raised and lowered the film level based on the terrain height. Successful model designs were produced by the USGS, such as the U-60, T-61, and in 1964, the T-64 model that was put into production by the Kelsh Instrument Company. It was sold to Canada, Greece, and to the U.S. Geological Survey. The operation of an orthophotoscope is similar to tracing correct planimetry from a stereomodel, as it continually adjusts the floating dot to keep it in contact with the terrain surface. After the aperture has moved across the stereomodel along one scan line, it is stepped in a vertical position that is the distance equal to the width of the aperture and the next scan line is exposed.

Current orthophotoscopes also operate by first scanning the entire stereo model by using the floating dot method, or by mathematically computing the parallax difference at each point using a statistical procedure called cross-correlation. The elevation along each scan line computed from the parallax difference is stored in a digital elevation model data file. This file is used to raise and lower the aperture as it moves along each scan line in the orthophotoscope. 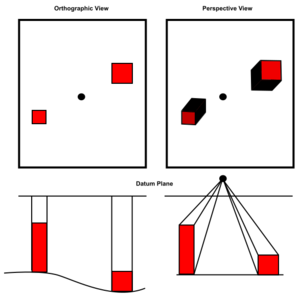 Orthographic views project at a right angle to the data plane. Perspective views project from the surface onto the datum plane from a fixed location.

An air photo is acquired by a large format camera that is mounted in a stabilized position with the camera pointing straight down at the earth’s surface to record the images in flight lines. A pair of photos is used for determining the relative difference in elevation. During a flight line, each photograph overlaps the previous one by 65%, which is called an endlap. This overlap allows the viewing of a stereomodel, which is a three-dimensional model of terrain elevation. A parallel flight line captures images with sidelap of about 25%.

In the digital process, the development of orthophotos must go through a process called differential rectification or orthorectification, which is a point-by-point correction of the scale and relief displacements normally resulting from variations in elevation between the aircraft and the topography over which the aircraft flies. The aircraft is flown at normal range heights using a standard wide-angle camera. The orthophotograph is created with a stereomodel of the terrain, the same approach adopted in plotting a conventional line map from aerial photographs using a stereo-plotting machine. The process applies the corrections to photographs prior to digitization, in which a photograph is scanned to produce a digital raster image. Aerial photographs are produced into digital orthophotos by dividing the given area of a photograph into very small, equal sized pixels. The geometric correction of aerial photographs requires the calculating of distortion at each point, and then shifting the image to the proper location. To produce an orthophotograph, the overlapping photographs are set up similarly to using a stereomodel, in which the plotting machine is replaced by a narrow opening, by which only one of the images is admitted through filtering to be recorded onto a film sheet. Instead of continuously following individual features, such as roads, field boundaries, streams, as done by a measuring mark, the aperture is made to transverse the stereomodel systematically in a series of parallel tranverses, forming a raster pattern to ensure that all details present in the stereo model are recorded orthogonally on the film below.

The digital photograph is registered when each pixel is placed in its precise geographic position by a program that takes into consideration the camera location, the orientation of the camera platform, and the heights of all points in the grid of the area photographed. In the photogrammetric method, it “combines ground-surveyed measurements with measurements taken on aerial images to provide precise, orthographically correct coordinate locations.” This process requires the measurement of the photo coordinates and their combination of x, y, and z coordinates. Photo coordinates can be measured using a ruler or calipers, but they are usually measured using digital methods. The displacement is then calculated for each point in the raster image, and distortion is removed for each raster cell.

Multiple photographs can be analyzed, corrected, and mosaicked all at once by a process called “bundle adjustment”, in which interrelated sets of equations are used to find a globally optimal set of corrections across all photographs. If a photo is black and white, each pixel is assigned a single numerical value corresponding to its light intensity. Color orthophotos are handled in an analogous way by transforming a vector of light intensities for different color bands into a single number. After the model has been scanned, the film is then developed as a negative orthophotograph, and it would usually be brought to the required scale by appropriate scaling or setting of the stereomodel---and can be enlarged or reduced by the user if the scaling has not been adjusted after being scanned.

Orthophotos at the U.S. Geological Survey

The systematic production of orthophotographs began at the United States Geological Survey (USGS) Western Mapping Center, now called the Western Geographic Science Center in Menlo Park, California, in 1965 by using the T-64 Orthophotoscope. This analogue process was used up to the early 1980s, in which production was labour intensive and done primarily in-house. Analogue orthophotos were derived mainly from high altitude, 1:80,000-scale aerial photographs and were then produced in 7.5-minute units. There were also problems regarding the limitations of equipment and restrictive film properties. Technicians throughout the 1970s at WMC were trying to develop new photographic techniques that would improve the methods used and quality of their products, such as ways to use new high contrast lithographic duplicating film to create machine-processed continuous-tone images, as well as developing a computer technique for reliable film exposures and processing controls.

During the 1980s that the Western Mapping Center created notes and algorithms for a digital method to produce orthophotos at a much easier and faster rate, but computers lacked memory and speed to utilize this effectively. As computers became faster by 1986, the WMC was granted approval to develop a new digital orthophoto quadrangle (DOQ) production system. The intent of producing this system was to develop a more efficient method for producing hard-copy orthophotos, as well as creating a digital product which users could manipulate and use as a base map.

The U.S. Department of Agriculture (USDA) was also interested in producing more current soil maps. When the USDA became aware of the work done by the WMC, an agreement was made for the USDA to provide funding for preliminary production of large quantities of DOQs. The USDA was interested in producing a high resolution product that could be created using 1:80,000-scale aerial photographs, in which the DOQs were based on a new 1:40,000-scale aerial photograph program that yielded a 3.75-minute format or one-fourth of a standard 7.5-minute quadrangle, and approximately 1-metre resolution.

The full scale production of DOQs at the WMC started in 1991, when 65 DOQs equal in size to one quadrangle were delivered. Technical specifications for developing DOQs were finalized, and the UGGS joined the USDA and other Federal agencies to create the National Orthophoto program. This program ensures the public domain availability of DOQ data for the entire United States. During that same year, 2,600 DOQs were created in-house at WMC, and 2,804 DOQs were contracted out. Any DOQs produced by contractors had to be routed back through the WMC for evaluation and validation.

The production of DOQs peaked in 1999 when WMC was responsible for contract production and in-house production of 47,000 DOQs. The DOQ program at the WMC tapered off after 2000 because coverage of the coterminous United States was nearing completion and production as well as contracting duties for DOQs had been relocated to the USGS mapping center in Rolla, Missouri.

Types of DOQs produced by the U.S. Geological Survey

Characteristics of a DOQ

Digital orthophoto quadrangles are produced by the USGS and are gray scale, natural color, or color infrared (CIR) images with a 1-meter ground resolution. The images cover an area measuring 3.75-minutes longitude by 3.75-minutes latitude or 7.5 minutes longitude by 7.5 minutes latitude. A DOQ has between 50 and 300 meters over edge image beyond the latitude and longitude corner crosses embedded in the image. A standard DOQ is formatted with an ASCII keyword header followed by a series of 8-bit binary image lines. Color DOQs are 24-bit band-interleaved-by-pixel (BIP) images. In the header, it contains a wide range of data for identifying, displaying and georeferencing the image. All Digital Orthophoto Quadrangles are referenced to the North American Datum of 1983 (NAD 83) and cast as a UTM projection. The primary (NAD 83) and secondary (NAD 27) datum coordinates for the upper left pixel are included in the header in order for users to spatially reference other digital data to the DOQ.

These are needed for a DOQ:

A Digital Ortho Quadrangle can be integrated into any geographic information system (GIS) that can manipulate raster images. DOQ’s can be a cartographic base for displaying, generating and modifying digital planimetric data. A DOQ can be used in applications such as vegetation, timber management, routing or habitat analysis, environmental impact assessment, emergency evacuation planning, flood analysis, soil erosion assessment, facility management, ground water or watershed analysis. The accuracy and detail provided by DOQs enable users to evaluate the data for accuracy and make real time modifications to data. 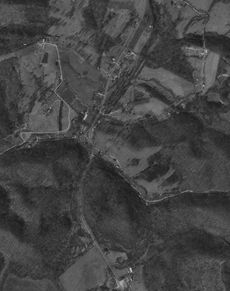 A DOQQ has a one meter pixel resolution covering areas measuring 3.75-minutes longitude and latitude at a 1:12,000 scale. DOQQs are available in Native and Geotiff formats. Native format quarter quads consist of an ASCll keyboard header followed by a series of 8-bit binary image lines for B/W and 24-bit band-interleaved-by-pixel (BIP) for color.