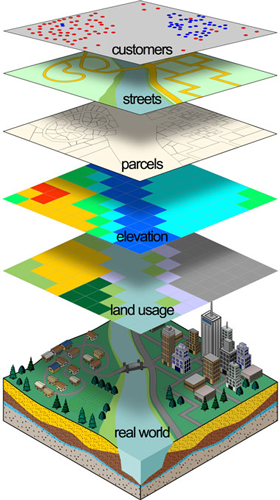 Overlay is a GIS operation that superimposes multiple data sets (representing different themes) together for the purpose of identifying relationships between them.[2]. An overlay creates a composite map by combining the geometry and attributes of the input data sets. Tools are available in most GIS software for overlaying both Vector or raster data.

Before the use of computers, a similar effect was develioped by Ian McHarg and others by drawing maps of the same area at the same scale on clear plastic and actually laying them on top of each other.

Feature overlays from vector data are created when one vector layer (points, lines, or polygons) is merged with one or more other vector layers covering the same area with points, lines, and/or polygons. A resultant new layer is created that combines the geometry and the attributes of the input layers.

An example of overlay with vector data would be taking a watershed layer and laying over it a layer of counties. The result would show which parts of each watershed are in each county.

Various GIS software packages offer a variety of polygon overlay tools, often with differing names. Of these, the following three are used most commonly for the widest variety of purposes:

The remainder are used less often, and in a narrower range of applications. If a tool is not available, all of these could be derived from the first three in two or three steps.

Raster overlay involves two or more different sets of data that derive from a common grid. The separate sets of data are usually given numerical values. These values then are mathematically merged together to create a new set of values for a single output layer [4]. Raster overlay is often used to create risk surfaces, sustainability assessments, value assessments, and other procedures. An example of raster overlay would be to divide the habitat of an endangered species into a grid, and then getting data for multiple factors that have an effect on the habitat and then creating a risk surface to illustrate what sections of the habitat need protecting most.

Overlay is covered in section AM4-2 in the 2006 GIS&T Body of Knowledge.