The basic data elements of phytogeography are occurrence records (presence or absence of a species) with operational geographic units such as political units or geographical coordinates. These data are often used to construct phytogeographic provinces (floristic provinces) and elements. 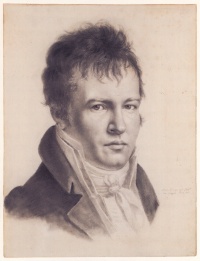 An 1815 self-portrait of Alexander von Humboldt. Humboldt is often referred to as the "father of phytogeography".

Phytogeography has a long history. One of the subjects earliest proponents was Prussian naturalist Alexander Von Humboldt, (September 14, 1769 – May 6, 1859) who is often referred to as the "father of phytogeography". Von Humboldt advocated a quantitative approach to phytogeography that has characterized modern plant geography.

Gross patterns of the distribution of plants became apparent early on in the study of plant geography. For example, Alfred Russel Wallace, co-discoverer of the principle of natural selection discussed the Latitudinal gradients in species diversity, a pattern observed in other organisms as well. Much research effort in plant geography has since then has been devoted to understanding this pattern and describing it in more detail.

Research in plant geography has also been directed to understanding the patterns of adaptation of species to the environment. This is done chiefly by describing geographical patterns of trait/environment relationships these patterns termed ecogeographical rules when applied to plants represent another area of phytogeography. Recently, a new field termed macroecology has developed, which focuses on broad-scale (in both time and space) patterns and phenomena in ecology. Macroecology focuses as much on other organisms as plants.

Branches of Biology relevant to Phytogeography

Phytogeography is part of a more general science known as biogeography. Phytogeographers are concerned with patterns and process in plant distribution. Most of the major questions and kinds of approaches taken to answer such questions are held in common between phyto- and zoogeographers.

Phytogeography is often divided into two main branches: Ecological phytogeography and Historical phytogeography. The former investigates the role of current day biotic and abiotic interactions in influencing plant distributions; the latter are concerned with historical reconstruction of the origin, dispersal, and extinction of taxa. Floristics is a study of the flora of some territory or area. Traditional phytogeography concerns itself largely with floristics and floristic classification, see floristic province.