From wiki.gis.com
Jump to: navigation, search
This article is about the picture element. For other uses, see Pixel (disambiguation).

This example shows an image with a portion greatly enlarged, in which the individual pixels are rendered as little squares and can easily be seen. 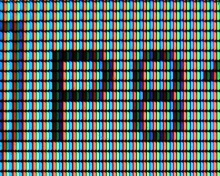 In digital imaging, a pixel[1] (or picture element) is the smallest item of information in an image. Pixels are normally arranged in a 2-dimensional grid, and are often represented using dots or squares. Each pixel is a sample of an original image, where more samples typically provide more-accurate representations of the original. The intensity of each pixel is variable; in color systems, each pixel has typically three or four components such as red, green, and blue, or cyan, magenta, yellow, and black.

The word pixel is based on a contraction of pix ("pictures") and el (for "element"); similar formations with el  for "element" include the words: voxel[2] and texel.[2]

The word "pixel" was first published in 1965 by Frederic C. Billingsley of JPL (in Pasadena, CA), to describe the picture elements of video images from space probes to the Moon and Mars. However, Billingsley did not coin the term himself. Instead, he got the word "pixel" from Keith E. McFarland, at the Link Division of General Precision in Palo Alto, who did not know where the word originated. McFarland said simply it was "in use at the time" (circa 1963).

The word is a combination of picture and element, via pix. The word pix orginated in 1932.[3] It appeared in Variety magazine headlines at least by 1934, as an abbreviation for the word pictures, in reference to movies.[4] By 1938, "pix" was being used in reference to still pictures by photojournalists.[4]

The concept of a "picture element" dates to the earliest days of television, for example as "Bildpunkt" (the German word for pixel, literally picture point) in the 1888 German patent of Paul Nipkow. According to various etymologies, the earliest publication of the term picture element itself was in Wireless World magazine in 1927,[5] though it had been used earlier in various U.S. patents filed as early as 1911.[6]

Some authors explain pixel as picture cell, as early as 1972.[7]

In video processing, pel is often used instead of pixel.[8] For example, IBM used it in their Technical Reference for the original PC.

A voxel is a volume element, the 3D analogue of a 2D pixel.

Surfels (surface elements) have the same naming pattern as pixels, but share more similarities with shrunken triangles than expanded pixels.

A pixel does not need to be rendered as a small square. This image shows alternative ways of reconstructing an image from a set of pixel values, using dots, lines, or smooth filtering.

A pixel is generally thought of as the smallest single component of a digital image. The definition is highly context-sensitive. For example, there can be "printed pixels" in a page, or pixels carried by electronic signals, or represented by digital values, or pixels on a display device, or pixels in a digital camera (photosensor elements). This list is not exhaustive, and depending on context, there are several terms that are synonymous in particular contexts, such as pel, sample, byte, bit, dot, spot, etc. The term "pixels" can be used in the abstract, or as a unit of measure, in particular when using pixels as a measure of resolution, such as: 2400 pixels per inch, 640 pixels per line, or spaced 10 pixels apart.

The measures dots per inch (dpi) and pixels per inch (ppi) are sometimes used interchangeably, but have distinct meanings, especially for printer devices, where dpi is a measure of the printer's density of dot (e.g. ink droplet) placement.[9] For example, a high-quality photographic image may be printed with 600 ppi on a 1200 dpi inkjet printer.[10] Even higher dpi numbers, such as the 4800 dpi quoted by printer manufacturers since 2002, do not mean much in terms of achievable resolution.[11]

The more pixels used to represent an image, the closer the result can resemble the original. The number of pixels in an image is sometimes called the resolution, though resolution has a more specific definition. Pixel counts can be expressed as a single number, as in a "three-megapixel" digital camera, which has a nominal three million pixels, or as a pair of numbers, as in a "640 by 480 display", which has 640 pixels from side to side and 480 from top to bottom (as in a VGA display), and therefore has a total number of 640 × 480 = 307,200 pixels or 0.3 megapixels.

The pixels, or color samples, that form a digitized image (such as a JPEG file used on a web page) may or may not be in one-to-one correspondence with screen pixels, depending on how a computer displays an image.

In computing, an image composed of pixels is known as a bitmapped image or a raster image. The word raster originates from television scanning patterns, and has been widely used to describe similar halftone printing and storage techniques.

For convenience, pixels are normally arranged in a regular two-dimensional grid. By using this arrangement, many common operations can be implemented by uniformly applying the same operation to each pixel independently.

Other arrangements of pixels are also possible, with some sampling patterns even changing the shape (or kernel) of each pixel across the image.

For this reason, care must be taken when acquiring an image on one device and displaying it on another, or when converting image data from one pixel format to another.

Computers can use pixels to display an image, often an abstract image that represents a GUI. The resolution of this image is called the display resolution and is determined by the video card of the computer.

If the aspect ratio of the physical display and the selected resolution are different, many different things can happen. On some LCDs, the monitor will stretch or squash the image to fill the entire display. This can result in the image appearing blurry or jagged.

For color depths of 15 or more bits per pixel, the depth is normally the sum of the bits allocated to each of the red, green, and blue components. Highcolor, usually meaning 16 bpp, normally has five bits for red and blue, and six bits for green, as the human eye is more sensitive to errors in green than in the other two primary colors. For applications involving transparency, the 16 bits may be divided into five bits each of red, green, and blue, with one bit left for transparency. A 24-bit depth allows 8 bits per component. On some systems, 32-bit depth is available: this means that each 24-bit pixel has an extra 8 bits to describe its opacity (for purposes of combining with another image). 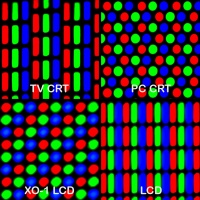 Geometry of color elements of various CRT and LCD displays; phosphor dots in a color CRT display (top row) bear no relation to pixels or subpixels.

Many display and image-acquisition systems are, for various reasons, not capable of displaying or sensing the different color channels at the same site. Therefore, the pixel grid is divided into single-color regions that contribute to the displayed or sensed color when viewed at a distance.

In some displays, such as LCD, LED, and plasma displays, these single-color regions are separately addressable elements, which have come to be known as "subpixels". For example, LCDs typically divide each pixel horizontally into three subpixels.

Most digital camera image sensors also use single-color sensor regions, for example using the Bayer filter pattern, but in the case of cameras these are known as pixels, not subpixels.

For systems with subpixels, two different approaches can be taken:

This latter approach, referred to as subpixel rendering, uses knowledge of pixel geometry to manipulate the three colored subpixels separately, producing a slight increase in the apparent resolution of color displays.

While CRT displays also use red-green-blue masked phosphor areas, dictated by a mesh grid called the shadow mask, it would require a difficult calibration step to be aligned with the displayed pixel raster, and so CRTs do not currently use subpixel rendering.

Digital cameras use photosensitive electronics, either charge-coupled device (CCD) or complementary metal–oxide–semiconductor (CMOS) image sensors, consisting of a large number of single sensor elements, each of which records a measured intensity level. In most digital cameras, the sensor array is covered with a patterned color filter mosaic having red, green, and blue regions in the Bayer filter arrangement, so that each sensor element can record the intensity of a single primary color of light. The camera interpolates the color information of neighboring sensor elements, through a process called demosaicing, to create the final image. These sensor elements are often called "pixels", even though they only record 1 channel (only red, or green, or blue) of the final color image. Thus, two of the three color channels for each sensor must be interpolated and a so-called N-megapixel camera that produces an N-megapixel image provides only one-third of the information that an image of the same size could get from a scanner. Thus, certain color contrasts may look fuzzier than others, depending on the allocation of the primary colors (green has twice as many elements as red or blue in the Bayer arrangement).

In contrast to conventional image sensors, the Foveon X3 sensor uses three layers of sensor elements, so that it detects red, green, and blue intensity at each array location. This structure eliminates the need for de-mosaicing and eliminates the associated image artifacts, such as color blurring around sharp edges. Citing the precedent established by mosaic sensors, Foveon counts each single-color sensor element as a pixel, even though the native output file size has only one pixel per three camera pixels.[15] With this method of counting, an N-megapixel Foveon X3 sensor therefore captures the same amount of information as an N-megapixel Bayer-mosaic sensor, though it packs the information into fewer image pixels, without any interpolation. 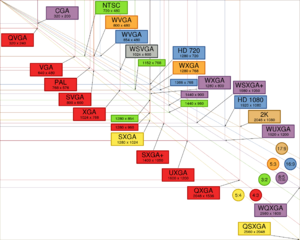