From wiki.gis.com
(Redirected from Point)
Jump to: navigation, search
For other uses, see Point.

In geometry, topology and related branches of mathematics a spatial point describes a specific object within a given space that consists of neither volume, area, length, nor any other higher dimensional analogue. Thus, a point is a 0-dimensional object. Because of their nature as one of the simplest geometric concepts, they are often used in one form or another as the fundamental constituents of geometry, physics, vector graphics, and many other fields. 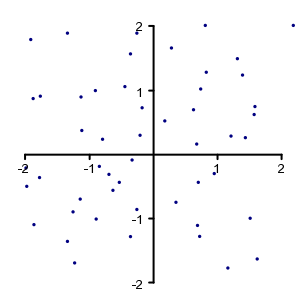 Points are most often considered within the framework of Euclidean geometry, where they are one of the fundamental objects. Euclid originally defined the point vaguely, as "that which has no part". In two dimensional Euclidean space, a point is represented by an ordered pair,

, of numbers, where the first number conventionally represents the horizontal and is often denoted by

, and the second number conventionally represents the vertical and is often denoted by

. This idea is easily generalized to three dimensional Euclidean space, where a point is represented by an ordered triplet,

, with the additional third number representing depth and often denoted by z. Further generalizations are represented by an ordered tuplet of n terms,

where n is the dimension of the space in which the point is located.

Many constructs within Euclidean geometry consist of an infinite collection of points that conform to certain axioms. This is usually represented by a set of points; As an example, a line is an infinite set of points of the form:

are constants and n is the dimension of the space. Similar constructions exist that define the plane, line segment and other related concepts.

In addition to defining points and constructs related to points, Euclid also postulated a key idea about points; he claimed that any two points can be connected by a straight line, this is easily confirmed under modern expansions of Euclidean geometry, and had grave consequences at the time of its introduction, allowing the construction of almost all the geometric concepts of the time. However, Euclid's axiomatization of points was neither complete nor definitive, as he occasionally assumed facts that didn't follow directly from his axioms, such as the ordering of points on the line or the existence of specific points, but in spite of this, modern expansions of the system have since removed these assumptions.

Points in Branches of Mathematics

A point in point-set topology is defined as a member of the underlying set of a topological space.

Despite the notion of point is considered as fundamental in mainstream geometry and topology, there are some theories that eliminate this notion. These are noncommutative geometry and pointless topology. A “pointless space” is defined not as a set, but via some structure (algebraical or logical respectively) which looks like well known function spaces on the set: algebra of continuous functions and algebra of sets respectively. More precisely, such structures generalize well known spaces of functions in a way that the operation “take a value in this point” may not be defined.