As used in geographical information systems, a point is a discrete location on the surface of the planet, represented by an x-y coordinate pair. Each point on the map is created by latitude and longitude coordinates, and is stored as an individual record in a file. [1]

A point feature can be used to represent the location of any number of real world features. These include soil samples, boreholes, manholes, rain gauges, burst water mains, pumping stations, trees, buildings. The point consists of a number of nodes with no thickness and is often referred to as zero dimensional. The image below shows one method for storing a point feature in a GIS - as a table in a database management system.

The pointer to attribute data is a link to another database table where other data about that point is kept. For example that it represents an access chamber to a sewer system and that it has properties such as date of construction, condition, size, material, etc. A link to a full database management system allows further relations to be made.[2] 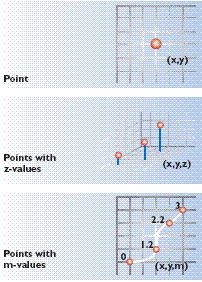 Multipoints are features that are composed of more than one point. Multipoints are often used to manage arrays of very large point collections, such as lidar point clusters, which can contain literally billions of points. Using a single row for such point geometry is not feasible. Clustering these into multipoint rows enables the geodatabase to handle massive point sets. [3]

The multipoint has geometry that consists of more than one point, as in the example given above, but all these points are regarded as a single feature. The multipoint is considered the equivalent of a multi-part polygon, or multiline. A multipoint can be converted to a point if it becomes necessary.