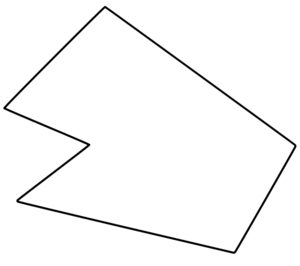 An example of a simple polygon

In computational geometry, the point-in-polygon (PIP) problem asks whether a given point in the plane lies inside, outside, or on the boundary of a polygon. It is a special case of point location problems and finds applications in areas that deal with processing geometrical data, such as computer graphics, geographical information systems (GIS), motion planning, and CAD.

An early description of the problem in computer graphics shows two common approaches (ray casting and angle summation) in use as early as 1974.[1]

An attempt of computer graphics veterans to trace the history of the problem and some tricks for its solution can be found in an issue of the Ray Tracing News.[2]

One simple way of finding whether the point is inside or outside a simple polygon is to test how many times a ray starting from the point intersects the edges of the polygon. If the point in question is not on the boundary of the polygon, the number of intersections is an even number if the point is outside, and it is odd if inside. This algorithm is sometimes also known as the crossing number algorithm or the even-odd rule algorithm. The algorithm is based on a simple observation that if a point moves along a ray from infinity to the probe point and if it crosses the boundary of a polygon, possibly several times, then it alternately goes from the outside to inside, then from the inside to the outside, etc. As a result, after every two "border crossings" the moving point goes outside. This observation may be mathematically proved basing on the Jordan curve theorem.

If implemented on a computer with finite precision arithmetics, the results may be incorrect if the point lies very close to that boundary, because of rounding errors. This is not normally a concern, as speed is much more important than complete accuracy in most applications of computer graphics. However, for a formally correct computer program, one would have to introduce a numerical tolerance ε and test in line whether P lies within ε of L, in which case the algorithm should stop and report "P lies very close to the boundary."

Most implementations of the ray casting algorithm consecutively check intersections of a, say, horizontal ray with all sides of the polygon in turn. In this case the following problem must be addressed. If the ray passes exactly through a vertex of a polygon, then it will intersect 2 segments at their endpoints. While it is OK for the case of, say, the topmost vertex in the example, the case of, say, the rightmost vertex (in the example) requires that we count one intersection for the algorithm to work correctly. A similar problem arises with horizontal segments that happen to fall on the ray. The issue is solved as follows. If the intersection point is a vertex of a tested polygon side, then the intersection counts only if the second vertex of the side lies below the ray.

Once again, the case of the ray passing through a vertex may pose numerical problems in finite precision arithmetics: for two sides adjacent to the same vertex the straightforward computation of the intersection with a ray may not give the vertex in both cases. If the polygon is specified by its vertices, then this problem is eliminated by checking the y-coordinates of the ray and the ends of the tested polygon side before actual computation of the intersection. In other cases, when polygon sides are computed from other types of data, other tricks must be applied for the numerical robustness of the algorithm.

The point in polygon problem may be considered in the general repeated geometric query setting: given a single polygon and a sequence of query points, quickly find the answers for each query point. Clearly, any of the general approaches for planar point location may be used. Simpler solutions are available for some special polygons.