In mathematics, a polygon is defined as a figure with three or more sides, and lying on one plane. Thus, triangles or octagons are examples of polygons. In the GIS world the meaning is similar, but goes beyond. The figure has three or more sides, though they are often irregular lines, and it lies on one plane. Beyond that, the polygon is used to represent the shape and location of different types of data, usually homogenous data. For example, a lake, a city block, or a patch of vegetation, can all be represented by polygons on a map layer. When GIS software is used to draw the outline of a lake on a map, the resulting shape is known as a polygon. The term ‘area’ is also used sometimes, instead of polygon.

A polygon is one of three feature types – others are line and point – with which almost all spatial data is depicted in GIS. Polygons, lines, and points are invariably depicted as vector data, as opposed to raster data.

Data is associated with each polygon, and is stored in an attribute table. In a relational database, related data can be associated with the basic polygon data. The image below shows a table listing information about parcels of land, and related ownership information. The data can be queried, so reports can be generated on specific items of interest. In the example below, for instance, a report could be generated showing the area and owner of each address.

Like all vector data, polygons are created on a map layer. Polygons must be defined in the same attribute table to be displayed in the same map layer. If a polygon – or set of polygons – is defined in a separate attribute table then it is displayed on a different map layer. Polygons are created in a variety of ways, the most common being digitizing raster maps, or drawing the feature in an edit session and defining the x-, y- coordinates of the feature’s vertices. If the raster map is georeferenced - its coordinates have been defined - then the digitized feature will place at the correct location on the map layer. Digitizing involves tracing the outline of an existing shape with tools provided by GIS software. A drawing can be created with any of a number of sketching tools provided with the software.

Polygons can be analyzed and manipulated in different ways. Their area and perimeter can be calculated, for instance. They can be labeled and have their fill color customized. Two or more polygons can be joined, or they can be divided. A multipart polygon can be created [1], in which a group of polygons has gaps between them but only one entry in the attribute table. Something like this can be used to show separate buildings on a common piece of land.

Polygons are represented on a map as vector data, as opposed to the raster data used for most base maps. Every label, node, vertex, and line of which a polygon consists must be stored with precise coordinates, and GIS software is designed to do this. 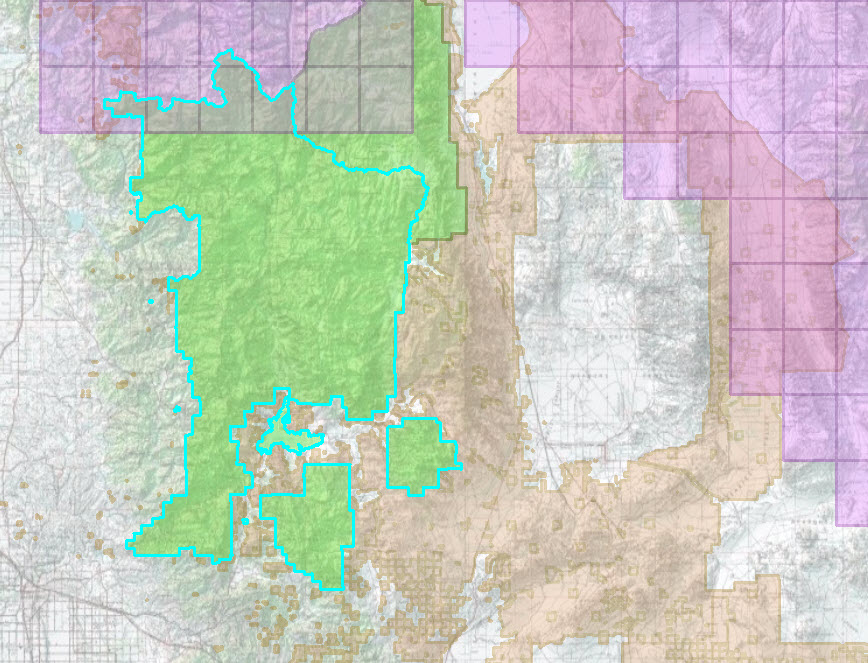