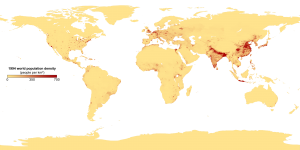 Population density (people per km2) map of the world in 1994.

Population density (in agriculture standing stock and standing crop) is a measurement of population per unit area or unit volume. It is frequently applied to living organisms, and particularly to humans. It is a key term used in geography.

Population density refers to the number of individuals per square kilometer of land area. It is a common biological measurement and is more often used by conservationists as a measure than population size.

Low densities may cause an extinction vortex and lead to further reduced fertility. This is called the Allee effect after the scientist who identified it. Examples of the causes in low population densities include: 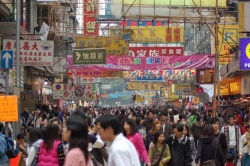 A street in Hong Kong, one of the most densely populated places in the world
Main article: List of countries by population density

For humans, population density is the number of people per unit of area usually per square kilometre (which may include or exclude cultivated or potentially productive area). Commonly this may be calculated for a county, city, country, another territory, or the entire world.

The world population is 6.7 billion [1], and Earth's area is 510 million square kilometers (197 million square miles) [2] . Therefore the worldwide human population density is 6.7 billion ÷ 510 million = 13.1 per km² (34.0 per sq mi), or 44.7 per km² (115.5 per sq mi) if only the Earth's land area of 150 million km² (58 million sq mi) is taken into account. This density rises when the population grows. It also includes all continental and island land area, including Antarctica. Considering that over half of the Earth's land mass consists of areas inhospitable to human inhabitation, such as deserts and high mountains, and that population tends to cluster around seaports and fresh water sources, this number by itself does not give any meaningful measurement of human population density.

Several of the most densely-populated territories in the world are city-states, microstates, micronations, or dependencies. These territories share a relatively small area and a high urbanization level, with an economically specialized city population drawing also on rural resources outside the area, illustrating the difference between high population density and overpopulation.

Cities with high population densities are, by some, considered to be overpopulated, though the extent to which this is the case depends on factors like quality of housing and infrastructure or access to resources. Most of the most densely-populated cities are in southern and eastern Asia, though Cairo and Lagos in Africa also fall into this category.

City population is, however, heavily dependent on the definition of "urban area" used: densities are often higher for the central municipality itself, than when more recently-developed and administratively unincorporated suburban communities are included, as in the concepts of agglomeration or metropolitan area, the latter including sometimes neighboring cities. For instance, Milwaukee has a greater population density when just the inner city is measured, and not the surrounding suburbs as well.

Other methods of measurement

While arithmetic density is the most common way of measuring population density, several other methods have been developed which aim to provide a more accurate measure of population density over a specific area.