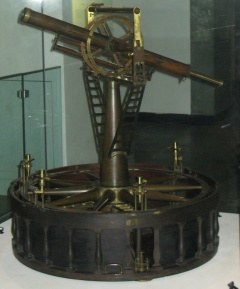 The Great Ramsden Theodolite is now in the Science Museum in London, England.
The Ramsden theodolite is a large theodolite that was specially constructed for use in the first Ordnance Survey of Southern Britain. It was also known as the Great or 36 inch theodolite.

The theodolite was commissioned from Jesse Ramsden, a leading Yorkshire instrument maker, who had developed an accurate dividing engine for graduating angular scales. The instrument was accurate to within a second of arc. The theodolite took three years to build and had a base circle of 3 ft (914 mm).

The full survey, sometimes called the Principal Triangulation of Great Britain, was begun in 1791 by a team formed under General William Roy (d 1790). The survey used the new theodolite on a specially surveyed baseline based on Roy's accurate surveys between London and Paris.

Traces of the theodolite support structure were still to be found many years afterwards at some remote survey points, such as at Soldiers' Lump, the summit of Black Hill in the Peak District of England.

The theodolite is now in the Science Museum in London.