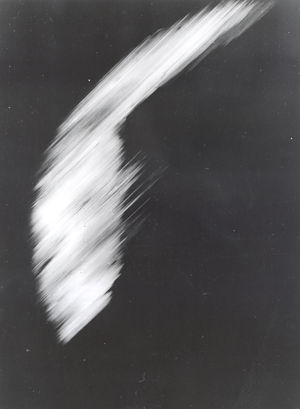 This is the first crude picture obtained from Explorer 6 Earth satellite. It shows a sun-lighted area of the Central Pacific ocean and its cloud cover. The picture was made when the satellite was about 17,000 mi (27,000 km) above the surface of the earth on August 14, 1959. At the time, the satellite was crossing Mexico.

Satellite imagery consists of photographs of Earth or other planets made by means of artificial satellites. 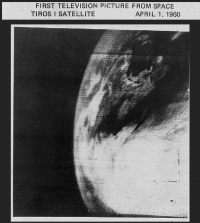 First television image of Earth from space transmitted by the TIROS-1 weather satellite.
First satellite photographs of Earth were made August 14, 1959 by the US satellite Explorer 6.[1][2] The first satellite photographs of the Moon might have been made on October 6, 1959 by the Soviet satellite Luna 3, on a mission to photograph the far side of the Moon. The Blue Marble photograph was taken from space in 1972, and has become very popular in the media and among the public. Also in 1972 the United States started the Landsat program, the largest program for acquisition of imagery of Earth from space. Landsat 7, the most recent Landsat satellite, was launched in 1999. In 1977, the first real time satellite imagery was acquired by the USA's KH-11 satellite system. 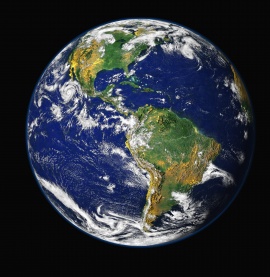 Satellite photography can be used to produce composite images of an entire hemisphere... 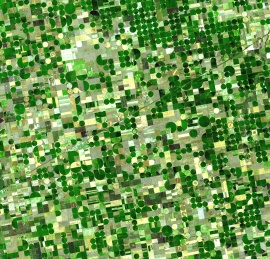 ...or to map a small area of the Earth, such as this photo of the countryside of Haskell County, Kansas, United States.

Satellite images have many applications in agriculture, geology, forestry, biodiversity conservation, regional planning, education, intelligence and warfare. Images can be in visible colours and in other spectra. There are also elevation maps, usually made by radar imaging. Interpretation and analysis of satellite imagery is conducted using software packages like ERDAS Imagine or ENVI. Some of the first image enhancement of satellite photos was conducted by the U.S. Government and its contractors. For example ESL Incorporated developed some of the earliest two dimensional Fourier transforms applied to digital image processing to address NASA photos as well as national security applications. Satellite imagery has also used in seismology and oceanography in deducing changes to land formation, water depth and sea bed, by colour caused by earthquakes, volcanoes, and tsunamis.[3]

There are two different types of resolution when discussing satellite imagery: radiometric, and geometric. Radiometric resolution refers to the effective bit-depth of the sensor (number of greyscale levels) and is typically expressed as 8-bit (0-255), 11-bit (0-2047), 12-bit (0-4095) or 16-bit (0-65,535). Geometric resolution refers to the satellite sensor's ability to effectively image a portion of the Earth's surface in a single pixel and is typically expressed in terms of Ground Sample Distance, or GSD. GSD is a term containing the overall optical and systemic noise sources and is useful for comparing how well one sensor can "see" an object on the ground within a single pixel. For example, the GSD of Landsat is ~30m, which means the smallest unit that maps to a single pixel within an image is ~30m x 30m. The latest commercial satellite (GeoEye 1) has a GSD of 0.41m (effectively 0.5 due to US Govt restrictions on civilian imaging). GSD for Intelligence/Military purposes, such as the National Reconnaissance Office programs, may have a resolution of less than a centimeter with the potential for real-time (live) imaging. The resolution of satellite images varies depending on the instrument used and the altitude of the satellite's orbit. For example, the Landsat archive offers repeated imagery at 30 meter resolution for the planet, but most of it has not been processed from the raw data. Landsat 7 has an average return period of 16 days. For many smaller areas, images with resolution as high as 10 cm can be available.[citation needed]

Satellite imagery is sometimes supplemented with aerial photography, which has higher resolution, but is more expensive per square meter. Satellite imagery can be combined with vector or raster data in a GIS provided that the imagery has been spatially rectified so that it will properly align with other data sets.

GeoEye's GeoEye-1 satellite was launched September 6, 2008.[5] The GeoEye-1 satellite has the highest resolution of any commercial imaging system and is able to collect images with a ground resolution of 0.41 meters (16 inches) in the panchromatic or black and white mode. It collects multispectral or color imagery at 1.65-meter resolution or about 64 inches, a factor of two better than existing commercial satellites with four-band multistage imaging capabilities. While the satellite is able to collect imagery at 0.41 meters, GeoEye's operating license from the U.S. Government requires re-sampling the imagery to 0.5 meters for all customers not explicitly granted a waiver by the U.S. Government.

The 3 SPOT satellites in orbit (Spot 2, 4 and 5) provide images with a large choice of resolutions – from 2.5 m to 1 km. Spot Image also distributes multiresolution data from other optical satellites, in particular from Formosat-2 (Taiwan) and Kompsat-2 (South Korea) and from radar satellites (TerraSar-X, ERS, Envisat, Radarsat). Spot Image will also be the exclusive distributor of data from the forthcoming very-high resolution Pleiades satellites with a resolution of 0.50 meter or about 20 inches. The first launch is planned for the end of 2009. The company also offers infrastructures for receiving and processing, as well as added value options.

RapidEye's constellation of five satellites, launched in August 2008,[6] contain identical multispectral sensors which are equally calibrated. Therefore, an image from one satellite will be equivalent to an image from any of the other four, allowing for a large amount of imagery to be collected (4 million km² per day), and daily revisit to an area. Each travel on the same orbital plane at 630 km, and deliver images in 5 meter pixel size. RapidEye satellite imagery is especially suited for agricultural, environmental, cartographic and disaster management applications. The company not only offers their imagery, but consults with their customers to create services and solutions based on analysis of this imagery.

EROS A – a high resolution satellite with 1.9-1.2M resolution panchromatic was launched on December 5, 2000.

EROS B - the second-generation of Very High Resolution satellites with 70 cm resolution panchromatic, was launched on April 25, 2006.

Because the total area of the land on Earth is so large and because resolution is relatively high, satellite databases are huge and image processing (creating useful images from the raw data) is time-consuming. Depending on the sensor used, weather conditions can affect image quality: for example, it is difficult to obtain images for areas of frequent cloud cover such as mountain-tops.

Privacy concerns have been brought up by some who wish not to have their property shown from above. Google Maps responds to such concerns in their FAQ with the following statement: "We understand your privacy concerns... The images that Google Maps displays are no different from what can be seen by anyone who flies over or drives by a specific geographic location."

In 2005 the Australian company Astrovision (ASX: HZG) announced plans to launch the first commercial geostationary satellite in the Asia-Pacific. It intended to provide true color, real-time live satellite feeds, with down to 250 metres resolution over the entire Asia-Pacific region, from India to Hawaii and Japan to Australia. They were going to provide this content to users of 3G mobile phones, over Pay TV as a weather channel, and to corporate and government users.

Unfortunately, the market response to the AstroVision concept fell into the classic chicken-egg problem: potential customers were excited by the possibilities offered, but they were unwilling (or, in government cases, generally unable) to sign contracts for a service that would not be delivered for 3–4 years (the length of time required to build and launch the satellite). AstroVision ran low on funds and was forced to shut down the program in 2006. 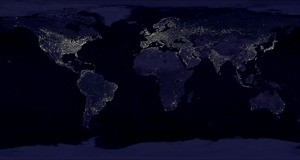 Composite image of Earth at night