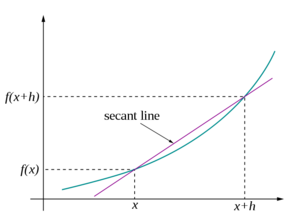 In geometry, a secant line, also simply called a secant, is a line passing through two points of a curve. As the two points are brought together (or, more precisely, as one is brought towards the other), the secant line tends to a tangent line. In abstract mathematics, the points connected by a secant line can be either real or complex conjugate imaginary. [1]

In map projections, the secant line is the line at which the developable surface of a conic or cylindrical projection "slices" through the sphere of the earth. This is opposed to a tangent line, where the developable surface only touches the sphere of the earth at one line. Because distortion increases as the distance from the standard parallel increases [2] the presence of two standard parallels increases the area of least distortion. This increase in accuracy is used by the Lambert Conformal Conic projection to produce accurate maps for areas of the United States. [3]