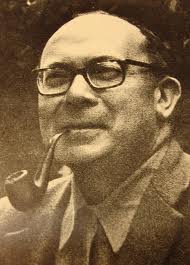 Semiotics is the science and study of signs and symbols, including language and other systems of communication. It is a discipline that is very similar to the philosophy of language, in that they both share a common focus on language. It is an important theoretical framework for Cartography, specifically the design of effective map symbology. Cartographers use symbols to represent direction, location, distance, function, characteristics, etc. These features of the real world are simplified and symbolized on maps as points, lines, and areas. GIS professionals must be aware of the signs and symbols they use and the effect they have on map readers. Choosing the best strategies for symbolization comes from knowing the variety of visual resources there are.

While the science of semiotics was originally founded by Charles Sanders Peirce in the 1860s,[1] its theories were first applied directly to cartography by Jacques Bertin in his 1967 book, The Semiology of Graphics.[2] Bertin developed a framework of visual variables available to the cartographer, including size, shape, value, texture or pattern, hue, orientation, and shape. These resources are then used to draw attention to certain elements within the cartographic endeavor. The real application of applying semiotics is to increase the ease of visual literacy within the cartographic process. All structure however is tied to the desires of the cartographer although there are some generally accepted rules of good design and semiotics. See Symbology for more details on cartographic elements.

Alan MacEachren further developed the use of semiotics as a theoretical framework for Cartography in his 1995 book, How Maps Work,[3] in which he surveys the entire field of semiotics, relating each theory and concept to cartographic design principles. 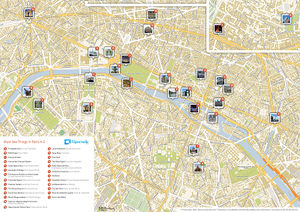 Paris Road Map - This map denotes signs and their inherent meanings. The relationship between the signs, meanings and real work objects provide the map reader with road and destination information using objects that provide the geographical context.

According to Peirce, symbols enable communication by forming a relationship between three distinct elements:

If map symbology is working properly, map readers observe the signs on a map and easily link them to both the proper interpretant and object. For example, "this red line is a highway, specifically U.S. Highway 6." This basic recognition aids subsequent analysis and decision making (e.g., "highways are usually faster than other roads, so I will travel Highway 6 to get to that city.")

Semiotics contains three branches which need to be taken into consideration by cartographers:[4]

Binary opposition is defined as two terms or concepts that have opposite meanings or are in stark contrast with one another.[5] It is one of the foundational points of Semiotics.[6] Examples include: Black and White, on and off, good and evil. Binary opposition is used in maps to show a stark contrast in one area versus another. See Contrast (map design) for more details.