Sensitivity analysis (SA) is the study of how the variation (uncertainty) in the output of a mathematical model can be apportioned, qualitatively or quantitatively, to different sources of variation in the input of a model [1].

It should not be expected that all outputs are correct preconceptions of their relationships with inputs in a model. Sensitivity analysis requires error checking to verify correct correspondence between inputs and outputs. Moreover, model simplification is crucial to the efficiency of a mathematical model. Fixing inputs that have no influence over outputs and removing redundant parts of the model structure contribute to its accuracy.

Mathematical problems met in social, economic or natural sciences may entail the use of mathematical models, which generally do not lend themselves to a straightforward understanding of the relationship between input factors (what goes into the model) and output (the model’s dependent variables). Such an appreciation, i.e. the understanding of how the model behaves in response to changes in its inputs, is of fundamental importance to ensure a correct use of the models.

A mathematical model is defined by a series of equations, input factors, parameters, and variables aimed to characterize the process being investigated.

Input is subject to many sources of uncertainty including errors of measurement, absence of information and poor or partial understanding of the driving forces and mechanisms. This uncertainty imposes a limit on our confidence in the response or output of the model. Further, models may have to cope with the natural intrinsic variability of the system, such as the occurrence of stochastic events.

In models involving many input variables sensitivity analysis is an essential ingredient of model building and quality assurance. With thorough sensitivity analysis, a study is done on each input variable. This helps the modeler understand the sensitivity of the model to each individual input parameter. National and international agencies involved in impact assessment studies have included sections devoted to sensitivity analysis in their guidelines. Examples are the European Commission, the White House Office of Management and Budget, the Intergovernmental Panel on Climate Change and the US Environmental Protection Agency.

The problem setting in sensitivity analysis has strong similarities with design of experiments. In design of experiments one studies the effect of some process or intervention (the 'treatment') on some objects (the 'experimental units'). In sensitivity analysis one looks at the effect of varying the inputs of a mathematical model on the output of the model itself. In both disciplines one strives to obtain information from the system with a minimum of physical or numerical experiments.

In uncertainty and sensitivity analysis there is a crucial trade off between how scrupulous an analyst is in exploring the input assumptions and how wide the resulting inference may be. The point is well illustrated by the econometrician Edward E. Leamer (1990) [2]:

Note Leamer’s emphasis is on the need for 'credibility' in the selection of assumptions. The easiest way to invalidate a model is to demonstrate that it is fragile with respect to the uncertainty in the assumptions or to show that its assumptions have not been taken 'wide enough'. The same concept is expressed by Jerome R. Ravetz, for whom bad modeling is when uncertainties in inputs must be suppressed lest outputs become indeterminate.[3]

In modern econometrics the use of sensitivity analysis to anticipate criticism is the subject of one of the ten commandments of applied econometrics (from Kennedy, 2007[4] ):

Thou shall confess in the presence of sensitivity. Corollary: Thou shall anticipate criticism [···] When reporting a sensitivity analysis, researchers should explain fully their specification search so that the readers can judge for themselves how the results may have been affected. This is basically an ‘honesty is the best policy’ approach, advocated by Leamer, (1978[5]).

The use of mathematical modelling can be the subject of controversies, see Nassim Nicholas Taleb[6] in Economics, and Orrin H. Pilkey and Linda Pilkey Jarvis[7] in Environmental Sciences. As noted by the latter Authors, this increases the relevance of sensitivity analysis in today's modelling practice[1] . 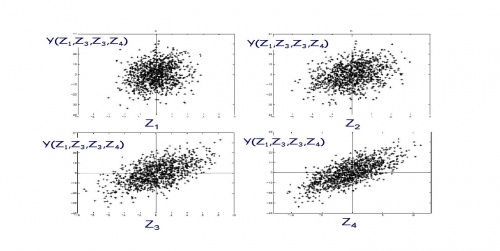 There are several possible procedures to perform uncertainty (UA) and sensitivity analysis (SA). Important classes of methods are:

Often (e.g. in sampling-based methods) UA and SA are performed jointly by executing the model repeatedly for combination of factor values sampled with some probability distribution. The following steps can be listed: 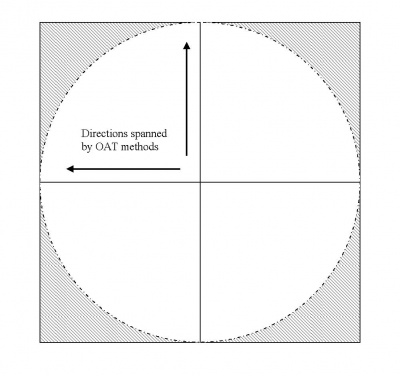 In sensitivity analysis a common approach is that of changing one-factor-at-a-time (OAT), to see what effect this produces on the output. This appears a logical approach as any change observed in the output will unambiguously be due to the single factor changed. Furthermore by changing one factor at a time one can keep all other factors fixed to their central or baseline value. This increases the comparability of the results (all ‘effects’ are computed with reference to the same central point in space) and minimizes the chances of computer programme crashes, more likely when several input factors are changed simultaneously. The later occurrence is particularly annoying to modellers as in this case one does not know which factor's variation caused the model to crash.

The paradox is that this approach, apparently sound, is non-explorative, with exploration decreasing rapidly with the number of factors. With two factors, and hence in two dimensions, the OAT explores (partially) a circle instead of the full square (see figure).

In k dimensions, the volume of the hyper-sphere included into (and tangent to) the unitary hyper-cube divided that of the hyper-cube itself, goes rapidly to zero (e.g. it is less than 1% already for k = 10, see Figure). Note also that t all OAT point are at most at a distance one from the origin by design. Given that the diagonal of the hypercube is

dimensions, if the points are distributed randomly there will be points (in the corners) which are distant from the origin

. In ten dimensions there are

Sensitivity analysis can be used

It provides as well information on:

Sensitivity Analysis is common in physics and chemistry[25], in financial applications, risk analysis, signal processing, neural networks and any area where models are developed. Sensitivity analysis can also be used in model-based policy assessment studies . Sensitivity analysis can be used to assess the robustness of composite indicators [26], also known as indices, such as the Environmental Pressure Index.

Computer environmental models are increasingly used in a wide variety of studies and applications. For example global climate model are used for both short term weather forecasts and long term climate change.

Moreover, computer models are increasingly used for environmental decision making at a local scale, for example for assessing the impact of a waste water treatment plant on a river flow, or for assessing the behavior and life length of bio-filters for contaminated waste water.

In both cases sensitivity analysis may help understanding the contribution of the various sources of uncertainty to the model output uncertainty and system performance in general. In these cases, depending on model complexity, different sampling strategies may be advisable and traditional sensitivity indexes have to be generalized to cover multivariate sensitivity analysis, heteroskedastic effects and correlated inputs. 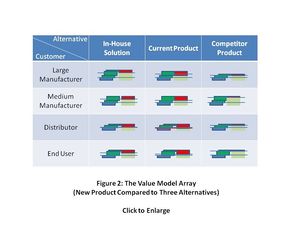 An example of a business use of sensitivity analysis.[28]

In a decision problem, the analyst may want to identify cost drivers as well as other quantities for which we need to acquire better knowledge in order to make an informed decision. On the other hand, some quantities have no influence on the predictions, so that we can save resources at no loss in accuracy by relaxing some of the conditions. See Corporate finance: Quantifying uncertainty. Sensitivity analysis can help in a variety of other circumstances which can be handled by the settings illustrated below:

However there are also some problems associated with sensitivity analysis in the business context:

Dissemination is done by the Joint Research Centre of the European Commission via summer schools, conferences and training courses. See: http://sensitivity-analysis.jrc.ec.europa.eu

Sensitivity Analysis can be performed in ArcMap by implementing the Semivariogram Sensitivity tool (a geostatistical analysis tool).

This topic is referenced in section GC6-5 of the GIS&T Body of Knowledge.

Both are selection of papers presented at the 2007 Conference of Sensitivity Analysis of Model Output (SAMO) held in Budapest in June. See SAMO 2007 for the slides of the presentations.