Shaded relief, or hill-shading, used in Cartographic relief depiction, shows the shape of the terrain in a realistic fashion by showing how the three-dimensional surface would be illuminated from a point light source. 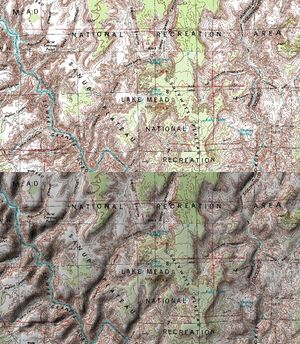 There are a number of factors worth taking into consideration before designing a shaded relief. Two such ideas are scale and generalization. At a small scale, it will be necessary to exaggerate the relief to obtain the desired effects. One must also consider alternative forms of displaying their shaded relief, such as from an aerial perspective or in a plan oblique relief. These both provide the viewer with a more realistic angle and point of view of the depicted area.[1]

A hillshade map is calculated from an elevation dataset using an algorithm that determines the amount of shadow to apply to each raster cell depending on the elevation value of that cell and the location of the light source- usually the northwest corner of the map. Slope and aspect values are also taken into account. The great thing about a hillshade map is that when you put it under some transparent layers, you get a sense of where those layers' features are in relation to the topography of an area. [2]

In most shaded relief maps, the light source is in the Northwest. Many people have pointed out that this is unrealistic for maps of the northern hemisphere, because the sun doesn't shine from that direction, and they have proposed using southern lighting. However, the normal convention is followed to avoid multistable perception illusions (i.e. crater/hill confusion).[3]

Traditionally shaded reliefs were drawn with charcoal, airbrush and other artist's media. Swiss cartographer Eduard Imhof is widely regarded as the master of manual hill-shading technique and theory. Imhof's contributions included a multi-color approach to shading, with purples in valleys and yellows on peaks. Shaded relief today is almost exclusively computer-generated using digital elevation models (DEM), with a resulting different look and feel. This model is used to show elevation with the use of a grid system of many small rectangular shapes that give the form of a three-dimensional virtual landscape. The light-dark pattern is used as a 3D illusion as west-facing slopes are brighter to show the luminosity of the sun and east-facing slopes are shaded to show the lack of sun.[4] The use of illumination and shadow to produce an appearance of three-dimensional space on a flat-surfaced map closely parallels the painting technique known as chiaroscuro. The DEM may be converted to shaded relief using software such as Adobe Photoshop or ArcMap's Spatial Analyst extension.

Resolution Bumping is a hybrid technique, developed by Tom Patterson, a cartographer for the U.S. National Park Service, for improving the appearance of shaded relief on small-scale maps. The analytical hillshading algorithms in GIS tend to produce images that emphasize ruggedness (areas with a high frequency of changing illumination) rather than prominence (the relative height of locations). Thus, an area of rolling hills may stand out more than a very high mountain that rises relatively smoothly (e.g., a shield volcano).

To counteract this, resolution bumping blends a high-resolution DEM with a lower-resolution DEM (either in an image editing program or in raster GIS using a weighted average). When the weights of the two inputs are properly balanced, the resultant shaded relief shows both small details and larger trends. According to Patterson, "Resolution bumping in effect 'bumps' or etches a suggestion of topographical detail onto generalized topographic surfaces" [5]. 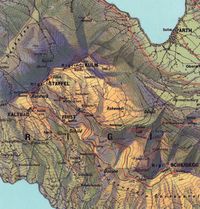 Shaded relief will normally have the background color of the terrain on the slopes facing the light source. This is easier to draw by hand and is normally what GIS software will produce when shaded relief is generated. Greater realism, however, can be produced if the slopes facing the light source, are actually illuminated, or in other words, are given a brighter color than the background color of the terrain layer. This greater realism enhances the sense of the three-dimensional nature of the terrain (which may also eliminate the need for hypsometric tinting). It will also allow for the terrain to be drawn with lighter shadows, which can be useful for map design concerns. The illumination can be portrayed in a complementary color to the terrain background color, which turns the map into a more aesthetically pleasing and artistic-looking map. While illuminated shaded relief was difficult to produce by hand and with early computer tools, it is now relatively easy to produce by editing images produced by a GIS with Photoshop or similar software.[6]

While a normal hillshade effect is produced by using a single light source that is placed an infinite distance away from the map, sky models use multiple light sources to mimic a real-life sky surrounding the map. [7] In more technical terms, Kenneth Field of ESRI describes them as follows, "[Sky models] build multiple hillshades with varying azimuth, zenith and intensity of light source and combine them in a weighted output to create hillshades under different lighting conditions with some dramatic effects". [8] This type of shading helps the map reader to determine relative heights of objects. [9] There are multiple sky models; some give the effect of a clear sky and others that of a cloudy sky. The International Commission on Illumination (CIE) standardizes these models. [7]