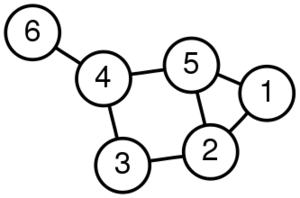 A graph with 6 vertices and 7 edges

In graph theory, the shortest path problem is the problem of finding a path between two vertices (or nodes) such that the sum of the weights of its constituent edges is minimized. An example is finding the quickest way to get from one location to another on a road map; in this case, the vertices represent locations and the edges represent segments of road and are weighted by the time needed to travel that segment.

Formally, given a weighted graph (that is, a set V of vertices, a set E of edges, and a real-valued weight function f : E → R), and one element v of V, find a path P from v to a v' of V so that

is minimal among all paths connecting v to v' .

The problem is also sometimes called the single-pair shortest path problem, to distinguish it from the following generalizations:

These generalizations have significantly more efficient algorithms than the simplistic approach of running a single-pair shortest path algorithm on all relevant pairs of vertices.

The most important algorithms for solving this problem are:

Additional algorithms and associated evaluations may be found in Cherkassky et al.[1]

Shortest path algorithms are applied to automatically find directions between physical locations, such as driving directions on web mapping websites like Mapquest or Google Maps. For this application fast specialized algorithms are available.[2]

If one represents a nondeterministic abstract machine as a graph where vertices describe states and edges describe possible transitions, shortest path algorithms can be used to find an optimal sequence of choices to reach a certain goal state, or to establish lower bounds on the time needed to reach a given state. For example, if vertices represents the states of a puzzle like a Rubik's Cube and each directed edge corresponds to a single move or turn, shortest path algorithms can be used to find a solution that uses the minimum possible number of moves.

A more lighthearted application is the games of "six degrees of separation" that try to find the shortest path in graphs like movie stars appearing in the same film.

The traveling salesman problem is the problem of finding the shortest path that goes through every vertex exactly once, and returns to the start. Unlike the shortest path problem, which can be solved in polynomial time in graphs without negative cycles (edges with negative weights), the traveling salesman problem is NP-complete and, as such, is believed not to be efficiently solvable (see P = NP problem). The problem of finding the longest path in a graph is also NP-complete.

The Canadian traveller problem and the stochastic shortest path problem are generalizations where either the graph isn't completely known to the mover, changes over time, or where actions (traversals) are probabilistic.

The problems of recalculation of shortest paths arises if some graph transformations (e.g., shrinkage of nodes) are made with a graph.[4]

There is a natural linear programming formulation for the shortest path problem, given below. It is very trivial compared to most other uses of linear programs in discrete optimization, however it illustrates connections to other concepts.

Given a directed graph (V, A) with source node s, target node t, and cost wij for each arc (i, j) in A, consider the program with variables xij for (i, j) in A:

and for all i,

This LP, which is common fodder for operations research courses, has the special property that it is integral; more specifically, every basic optimal solution (when one exists) has all variables equal to 0 or 1, and the set of edges whose variables equal 1 form an s-t dipath. See Ahuja et al.[5] for one proof, although the origin of this approach dates back to mid-20th century.

The dual for this linear program is

subject to for all ij,

and feasible duals correspond to the concept of a consistent heuristic for the A* algorithm for shortest paths. For any feasible dual y the reduced costs

are nonnegative and A* essentially runs Dijkstra's algorithm on these reduced costs.