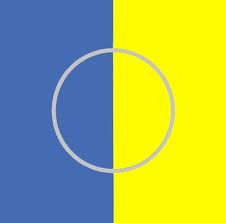 The gray circle is a consistent color, but appears darker on the light yellow background and lighter on the dark blue background due to simultaneous contrast.[1]

Simultaneous contrast is a physiological process in the vision system by which humans perceive different colors appearing next to each other appear to be more different than they actually are. This is applicable to cartography because it explains one of the ways we perceive colors on a map [2].

Simultaneous contrast can be both helpful and problematic in cartographic design. Objects next to lighter colors will appear darker, while objects next to darker colors will appear lighter. Making small objects lighter colors than their larger surroundings will make them more visible. However, due to the nature of the interaction between some color combinations, placing certain colors next to each other may make things difficult to distinguish or jarring to the eye. This is especially true when placing colored text on a map. For example, dark blue text on a white background will appear very clearly, but red text on a green backdrop is very difficult to read. That is why it is important, for successful cartography, to know which color combinations allow for clarity, and which ones cause confusion.