From wiki.gis.com
Jump to: navigation, search
This article is about the mathematical term. For other uses, see Slope (disambiguation). 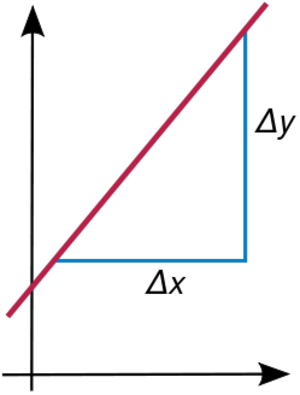 The slope of a line is defined as the rise over the run, m = Δy/Δx.

In mathematics, the slope or gradient of a line describes its steepness, incline, or grade. A higher slope value indicates a steeper incline.

Through differential calculus, one can calculate the slope of the line to a curve at a point.

The concept of slope applies directly to grades or gradients in geography and civil engineering. Through trigonometry, the grade m of a road is related to its angle of incline θ by

In GIS, raster-based slope computation tools estimate the rate of change between each cell and its neighbors. The slope in the output raster is calculated either as a percentage or degree of slope.[1]

The slope of a line in the plane containing the x and y axes is generally represented by the letter m, and is defined as the change in the y coordinate divided by the corresponding change in the x coordinate, between two distinct points on the line. This is described by the following equation:

(The delta symbol, "Δ", is commonly used in mathematics to mean "difference" or "change".)

Given two points (x1,y1) and (x2,y2), the change in x from one to the other is x2 − x1, while the change in y is y2 − y1. Substituting both quantities into the above equation obtains the following:

Note that the way the points are chosen on the line and their order does not matter; the slope will be the same in each case. Other curves have "accelerating" slopes and one can use calculus to determine such slopes.

The angle θ a line makes with the positive x axis is closely related to the slope m via the tangent function:

Two lines are parallel if and only if their slopes are equal and they are not coincident or if they both are vertical and therefore have undefined slopes. Two lines are perpendicular if the product of their slopes is -1 or one has a slope of 0 (a horizontal line) and the other has an undefined slope (a vertical line). Also, another way to determine a perpendicular line is to find the slope of one line and then to get its reciprocal and then reversing its positive or negative sign (e.g. a line perpendicular to a line of slope -2 is +1/2).

Slope of a road or railway

There are two common ways to describe how steep a road or railroad is. One is by the angle in degrees, and the other is by the slope in a percentage. See also mountain railway and rack railway. The formulae for converting a slope as a percentage into an angle in degrees and vice versa are:

where angle is in degrees and the trigonometry functions operate in degrees. For example, a 100% or 1000‰ slope is 45°.

If y is a linear function of x, then the coefficient of x is the slope of the line created by plotting the function. Therefore, if the equation of the line is given in the form

then m is the slope. This form of a line's equation is called the slope-intercept form, because b can be interpreted as the y-intercept of the line, the y-coordinate where the line intersects the y-axis.

If the slope m of a line and a point (x0,y0) on the line are both known, then the equation of the line can be found using the point-slope formula:

One can then write the line's equation, in point-slope form:

The slope of a linear equation in the general form:

If we let Δx and Δy be the distances (along the x and y axes, respectively) between two points on a curve, then the slope given by the above definition,

is the slope of a secant line to the curve. For a line, the secant between any two points is the line itself, but this is not the case for any other type of curve. 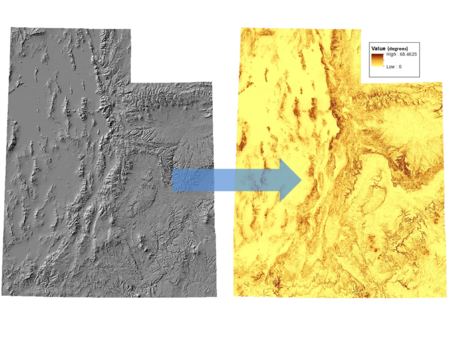 In this image, a DEM for the state of Utah was converted to a raster displaying the slope of Utah in degrees. Slope analysis for this image was done in a GIS using a surface analyst toolbox.
In GIS mapping slope can be very important for a variety of reasons including suitability analysis, predictive modeling, and predicting potential hazards. Analyzing the terrain slope of a given location plays an important part in fields such as hydrology, site planning, conservation, and infrastructure development [2]. Slope can be calculated from a Digital Elevation Model which form an important part of many GIS datasets; equally important are the parameters and techniques used to calculate terrain slope as well as other analyses performed with a DEM [3] . In Suitability analysis or predictive modeling, by calculating the slope within a GIS, areas can be eliminated that aren't suitable or that don't fit within the model. In predicting potential hazards, areas can be seen as dangerous due to the steepness of a slope. This is a very powerful and useful tool in GIS. Slope is calculated in a GIS by comparing a certain point within a raster to that point's neighbors. Usually a point is compared with eight of its neighbors to derive its slope, but the exact method varies depending on the specific slope analysis desired [4].