Spectroscopy was originally the study of the interaction between radiation and matter as a function of wavelength (λ). In fact, historically, spectroscopy referred to the use of visible light dispersed according to its wavelength, e.g. by a prism. Later the concept was expanded greatly to comprise any measurement of a quantity as function of either wavelength or frequency. Thus it also can refer to a response to an alternating field or varying frequency (ν). A further extension of the scope of the definition added energy (E) as a variable, once the very close relationship E = hν for photons was realized (h is the Planck constant). A plot of the response as a function of wavelength—or more commonly frequency—is referred to as a spectrum; see also spectral linewidth.

Spectrometry is the spectroscopic technique used to assess the concentration or amount of a given species. In those cases, the instrument that performs such measurements is a spectrometer or spectrograph.

Spectroscopy/spectrometry is often used in physical and analytical chemistry for the identification of substances through the spectrum emitted from or absorbed by them.

Spectroscopy/spectrometry is also heavily used in astronomy and remote sensing. Most large telescopes have spectrometers, which are used either to measure the chemical composition and physical properties of astronomical objects or to measure their velocities from the Doppler shift of their spectral lines.

The type of spectroscopy depends on the physical quantity measured. Normally, the quantity that is measured is an intensity, either of energy absorbed or produced.

Most spectroscopic methods are differentiated as either atomic or molecular based on whether or not they apply to atoms or molecules. Along with that distinction, they can be classified on the nature of their interaction:

Fluorescence spectroscopy uses higher energy photons to excite a sample, which will then emit lower energy photons. This technique has become popular for its biochemical and medical applications, and can be used for confocal microscopy, fluorescence resonance energy transfer, and fluorescence lifetime imaging. 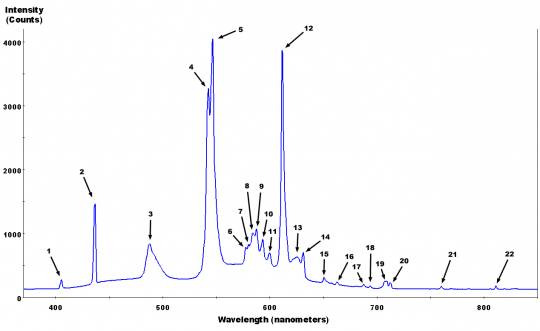 When X-rays of sufficient frequency (energy) interact with a substance, inner shell electrons in the atom are excited to outer empty orbitals, or they may be removed completely, ionizing the atom. The inner shell "hole" will then be filled by electrons from outer orbitals. The energy available in this de-excitation process is emitted as radiation (fluorescence) or will remove other less-bound electrons from the atom (Auger effect). The absorption or emission frequencies (energies) are characteristic of the specific atom. In addition, for a specific atom small frequency (energy) variations occur which are characteristic of the chemical bonding. With a suitable apparatus, these characteristic X-ray frequencies or Auger electron energies can be measured. X-ray absorption and emission spectroscopy is used in chemistry and material sciences to determine elemental composition and chemical bonding.

X-ray crystallography is a scattering process; crystalline materials scatter X-rays at well-defined angles. If the wavelength of the incident X-rays is known, this allows calculation of the distances between planes of atoms within the crystal. The intensities of the scattered X-rays give information about the atomic positions and allow the arrangement of the atoms within the crystal structure to be calculated.

Liquid solution samples are aspirated into a burner or nebulizer/burner combination, desolvated, atomized, and sometimes excited to a higher energy electronic state. The use of a flame during analysis requires fuel and oxidant, typically in the form of gases. Common fuel gases used are acetylene (ethyne) or hydrogen. Common oxidant gases used are oxygen, air, or nitrous oxide. These methods are often capable of analyzing metallic element analytes in the part per million, billion, or possibly lower concentration ranges. Light detectors are needed to detect light with the analysis information coming from the flame.

Plasma Emission Spectroscopy In some ways similar to flame atomic emission spectroscopy, it has largely replaced it.

A direct-current plasma (DCP) is created by an electrical discharge between two electrodes. A plasma support gas is necessary, and Ar is common. Samples can be deposited on one of the electrodes, or if conducting can make up one electrode.

Spark or arc (emission) spectroscopy - is used for the analysis of metallic elements in solid samples. For non-conductive materials, a sample is ground with graphite powder to make it conductive. In traditional arc spectroscopy methods, a sample of the solid was commonly ground up and destroyed during analysis. An electric arc or spark is passed through the sample, heating the sample to a high temperature to excite the atoms in it. The excited analyte atoms glow emitting light at various wavelengths which could be detected by common spectroscopic methods. Since the conditions producing the arc emission typically are not controlled quantitatively, the analysis for the elements is qualitative. Nowadays, the spark sources with controlled discharges under an argon atmosphere allow that this method can be considered eminently quantitative, and its use is widely expanded worldwide through production control laboratories of foundries and steel mills.

Many atoms emit or absorb visible light. In order to obtain a fine line spectrum, the atoms must be in a gas phase. This means that the substance has to be vaporised. The spectrum is studied in absorption or emission. Visible absorption spectroscopy is often combined with UV absorption spectroscopy in UV/Vis spectroscopy. Although this form may be uncommon as the human eye is a similar indicator, it still proves useful when distinguishing colours.

All atoms absorb in the Ultraviolet (UV) region because these photons are energetic enough to excite outer electrons. If the frequency is high enough, photoionization takes place. UV spectroscopy is also used in quantifying protein and DNA concentration as well as the ratio of protein to DNA concentration in a solution. Several amino acids usually found in protein, such as tryptophan, absorb light in the 280 nm range and DNA absorbs light in the 260 nm range. For this reason, the ratio of 260/280 nm absorbance is a good general indicator of the relative purity of a solution in terms of these two macromolecules. Reasonable estimates of protein or DNA concentration can also be made this way using Beer's law.

Infrared spectroscopy offers the possibility to measure different types of inter atomic bond vibrations at different frequencies. Especially in organic chemistry the analysis of IR absorption spectra shows what type of bonds are present in the sample. It is also an important method for analysing polymers and constituents like fillers, pigments and plasticizers.

The near infrared NIR range, immediately beyond the visible wavelength range, is especially important for practical applications because of the much greater penetration depth of NIR radiation into the sample than in the case of mid IR spectroscopy range. This allows also large samples to be measured in each scan by NIR spectroscopy, and is currently employed for many practical applications such as: rapid grain analysis, medical diagnosis pharmaceuticals/medicines[1], biotechnology, genomics analysis, proteomic analysis, interactomics research, inline textile monitoring, food analysis and chemical imaging/hyperspectral imaging of intact organisms[2][3][4], plastics, textiles, insect detection, forensic lab application, crime detection, various military applications, and so on.

Raman spectroscopy uses the inelastic scattering of light to analyse vibrational and rotational modes of molecules. The resulting 'fingerprints' are an aid to analysis.

CARS is a recent technique that has high sensitivity and powerful applications for in vivo spectroscopy and imaging[5].

Nuclear magnetic resonance spectroscopy analyzes the magnetic properties of certain atomic nuclei to determine different electronic local environments of hydrogen, carbon, or other atoms in an organic compound or other compound. This is used to help determine the structure of the compound.

Transmission or conversion-electron (CEMS) modes of Mössbauer spectroscopy probe the properties of specific isotope nuclei in different atomic environments by analyzing the resonant absorption of characteristic energy gamma-rays known as the Mössbauer effect.

There are many different types of materials analysis techniques under the broad heading of "spectroscopy", utilizing a wide variety of different approaches to probing material properties, such as absorbance, reflection, emission, scattering, thermal conductivity, and refractive index.

Background subtraction is a term typically used in spectroscopy when one explains the process of acquiring a background radiation level (or ambient radiation level) and then makes an algorithmic adjustment to the data to obtain qualitative information about any deviations from the background, even when they are an order of magnitude less decipherable than the background itself.