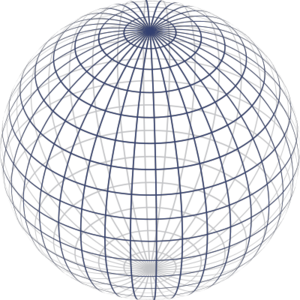 A two-dimensional representation of a sphere

A sphere (from Greek σφαίϝα—sphaira, "globe, ball,"[1]) is a perfectly round geometrical object in three-dimensional space, such as the shape of a round ball. Like a circle in two dimensions, a perfect sphere is completely symmetrical around its center, with all points on the surface lying the same distance r from the center point. This distance r is known as the radius of the sphere. The maximum straight distance through the sphere is known as the diameter of the sphere. It passes through the center and is thus twice the radius.

This article deals with the mathematical concept of a sphere. In physics, a sphere is an object (usually idealized for the sake of simplicity) capable of colliding or stacking with other objects which occupy space.

Volume of a sphere

In 3 dimensions, the volume inside a sphere is given by the formula

where r is the radius of the sphere, d = 2r is the diameter of the sphere and π is the constant pi. This formula was first derived by Archimedes, who showed that the volume of a sphere is 2/3 that of a circumscribed cylinder. (This assertion follows from Cavalieri's principle.) In modern mathematics, this formula can be derived using integral calculus, e.g. disk integration to sum the volumes of an infinite number of circular disks of infinitesimal thickness stacked centered side by side along the x axis from x = 0 where the disk has radius r (i.e. y = r) to x = r where the disk has radius 0 (i.e. y = 0).

At any given x, the incremental volume (δV) is given by the product of the cross-sectional area of the disk at x and its thickness (δx):

The total volume is the summation of all incremental volumes:

In the limit as δx approaches zero[2] this becomes:

At any given x, a right-angled triangle connects x, y and r to the origin, whence it follows from Pythagorean theorem that:

Thus, substituting y with a function of x gives:

This can now be evaluated:

This volume as described is for a hemisphere. Doubling it gives the volume of a sphere as:

In higher dimensions, the sphere (or hypersphere) is usually referred to as an n-ball. General recursive formulas exist for deriving the volume of an n-ball.

Surface area of a sphere

The surface area of a sphere is given by the formula

This formula was first derived by Archimedes, based upon the fact that the projection to the lateral surface of a circumscribing cylinder (i.e. the Gall-Peters map projection) is area-preserving. It is also the derivative of the formula for the volume with respect to r because the total volume of a sphere of radius r can be thought of as the summation of the volumes of an infinite number of spherical shells of infinitesimal thickness concentrically stacked on top of one another from radius 0 to radius r. At infinitesimal thickness the discrepancy between the inner and outer surface area of any given shell is infinitesimal and the elemental volume at radius r is simply the product of the surface area at radius r and the infinitesimal thickness.

At any given radius r, the incremental volume (δV) is given by the product of the surface area at radius r (A(r)) and the thickness of a shell (δr):

The total volume is the summation of all shell volumes:

In the limit as δr approaches zero[2] this becomes:

Since we have already proved what the volume is, we can substitute V:

Differentiating both sides of this equation with respect to r yields A as a function of r:

Which is generally abbreviated as:

Alternatively, the area element on the sphere is given in spherical coordinates by:

The total area can thus be obtained by integration:

A sphere of any radius centered at zero is an integral surface of the following differential form:

This equation reflects the fact that the position and velocity vectors of a point travelling on the sphere are always orthogonal to each other.

The sphere has the smallest surface area among all surfaces enclosing a given volume and it encloses the largest volume among all closed surfaces with a given surface area. For this reason, the sphere appears in nature: for instance bubbles and small water drops are roughly spherical, because the surface tension locally minimizes surface area. The surface area in relation to the mass of a sphere is called the specific surface area. From the above stated equations it can be expressed as follows: 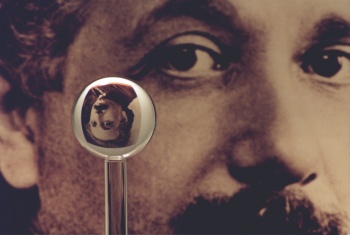 An image of one of the most accurate man-made spheres, as it refracts the image of Einstein in the background. This sphere was a fused quartz gyroscope for the Gravity Probe B experiment, and differs in shape from a perfect sphere by no more than 40 atoms of thickness. It is thought that only neutron stars are smoother. It was announced on 1 July 2008 that Australian scientists had created even more perfect spheres, accurate to 0.3 nanometers, as part of an international hunt to find a new global standard kilogram.[3]

Pairs of points on a sphere that lie on a straight line through its center are called antipodal points. A great circle is a circle on the sphere that has the same center and radius as the sphere, and consequently divides it into two equal parts. The shortest distance between two distinct non-antipodal points on the surface and measured along the surface, is on the unique great circle passing through the two points. Equipped with the great-circle distance, a great circle becomes the Riemannian circle.

If a particular point on a sphere is (arbitrarily) designated as its north pole, then the corresponding antipodal point is called the south pole and the equator is the great circle that is equidistant to them. Great circles through the two poles are called lines (or meridians) of longitude, and the line connecting the two poles is called the axis of rotation. Circles on the sphere that are parallel to the equator are lines of latitude. This terminology is also used for astronomical bodies such as the planet Earth, even though it is neither spherical nor even spheroidal (see geoid).

A sphere is divided into two equal hemispheres by any plane that passes through its center. If two intersecting planes pass through its center, then they will subdivide the sphere into four lunes or biangles, the vertices of which all coincide with the antipodal points lying on the line of intersection of the planes.

The antipodal quotient of the sphere is the surface called the real projective plane, which can also be thought of as the northern hemisphere with antipodal points of the equator identified.

Generalization to other dimensions

Spheres can be generalized to spaces of any dimension. For any natural number n, an n-sphere, often written as Sn, is the set of points in (n + 1)-dimensional Euclidean space which are at a fixed distance r from a central point of that space, where r is, as before, a positive real number. In particular:

The n-sphere of unit radius centred at the origin is denoted Sn and is often referred to as "the" n-sphere. Note that the ordinary sphere is a 2-sphere, because it is a 2-dimensional surface (which is embedded in 3-dimensional space).

where Γ(z) is Euler's Gamma function.

Another formula for surface area is

and the volume is the surface area times

If the center is a distinguished point considered as origin of E, as in a normed space, it is not mentioned in the definition and notation. The same applies for the radius if it is taken equal to one, as in the case of a unit sphere.

In contrast to a ball, a sphere may be an empty set, even for a large radius. For example, in Zn with Euclidean metric, a sphere of radius r is nonempty only if r2 can be written as sum of n squares of integers.

The n-sphere is denoted Sn. It is an example of a compact topological manifold without boundary. A sphere need not be smooth; if it is smooth, it need not be diffeomorphic to the Euclidean sphere.

The Heine-Borel theorem implies that a Euclidean n-sphere is compact. The sphere is the inverse image of a one-point set under the continuous function ||x||. Therefore the sphere is closed. Sn is also bounded, therefore it is compact. 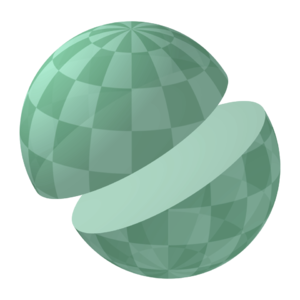 The basic elements of plane geometry are points and lines. On the sphere, points are defined in the usual sense, but the analogue of "line" may not be immediately apparent. If one measures by arc length one finds that the shortest path connecting two points lying entirely in the sphere is a segment of the great circle containing the points; see geodesic. Many theorems from classical geometry hold true for this spherical geometry as well, but many do not (see parallel postulate). In spherical trigonometry, angles are defined between great circles. Thus spherical trigonometry is different from ordinary trigonometry in many respects. For example, the sum of the interior angles of a spherical triangle exceeds 180 degrees. Also, any two similar spherical triangles are congruent.

Eleven properties of the sphere

In their book Geometry and the imagination[4] David Hilbert and Stephan Cohn-Vossen describe eleven properties of the sphere and discuss whether these properties uniquely determine the sphere. Several properties hold for the plane which can be thought of as a sphere with infinite radius. These properties are:

Cubes in relation to spheres