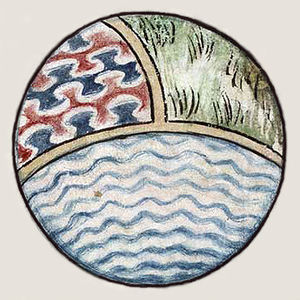 The concept of a spherical Earth dates back to around the 6th century BCE in ancient Greek philosophy.[1] It remained a matter of philosophical speculation until the 3rd century BCE when Hellenistic astronomy established the spherical shape of the earth as a physical given.

The concept of a spherical Earth displaced earlier beliefs in a flat Earth: In early Mesopotamian thought, the world was portrayed as a flat disk floating in the ocean, and this forms the premise for early Greek maps like those of Anaximander and Hecataeus of Miletus. Other speculations on the shape of Earth include a seven-layered ziggurat or cosmic mountain, alluded to in the Avesta and ancient Persian writings (see seven climes).

Early Greek philosophers alluded to a spherical Earth, though with some ambiguity.[2] This idea influenced Pythagoras (b. 570 BCE), who saw harmony in the universe and sought to explain it. He reasoned that Earth and the other planets must be spheres, since the most harmonious geometric solid form is a sphere.[1] After the fifth century BCE, no Greek writer of repute thought the world was anything but round.[2]

In The Histories, written 431 BCE - 425 BCE, Herodotus dismisses a report of the sun observed shining from the north. This arises when discussing the circumnavigation of Africa undertaken c. 615-595 BCE. (The Histories, 4.43) His dismissive comment attests to a widespread ignorance of the ecliptic's inverted declination in a southern hemisphere.

Plato (427 BCE - 347 BCE) traveled to southern Italy to study Pythagorean mathematics. When he returned to Athens and established his school, Plato also taught his students that Earth was a sphere. If man could soar high above the clouds, Earth would resemble "one of those balls which have leather coverings in twelve pieces, and is decked with various colors, of which the colors used by painters on earth are in a manner samples." (Phaedo, 110b) 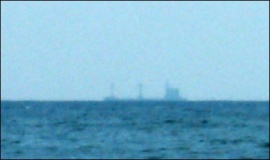 When a ship is at the horizon its lower part is invisible due to Earth's curvature. This was one of the first arguments favoring a round-Earth model.

Aristotle (384 BCE - 322 BCE) was Plato's prize student and "the mind of the school." Aristotle observed "there are stars seen in Egypt and [...] Cyprus which are not seen in the northerly regions." Since this could only happen on a curved surface, he too believed Earth was a sphere "of no great size, for otherwise the effect of so slight a change of place would not be quickly apparent." (De caelo, 298a2-10)

Aristotle provided physical and observational arguments supporting the idea of a spherical Earth:

The concepts of symmetry, equilibrium and cyclic repetition permeated Aristotle's work. In his Meteorology he divided the world into five climatic zones: two temperate areas separated by a torrid zone near the equator, and two cold inhospitable regions, "one near our upper or northern pole and the other near the ... southern pole," both impenetrable and girdled with ice (Meteorologica, 362a31-35). Although no humans could survive in the frigid zones, inhabitants in the southern temperate regions could exist.

Eratosthenes (276 BCE - 194 BCE) estimated Earth's circumference around 240 BCE. He had heard that in Syene the Sun was directly overhead at the summer solstice whereas in Alexandria it still cast a shadow. Using the differing angles the shadows made as the basis of his trigonometric calculations he estimated a circumference of around 250,000 stades. The length of a 'stade' is not precisely known, but Eratosthenes' figure only has an error of around five to ten percent.[3][4]

Seleucus of Seleucia (c. 190 BC), who lived in the Seleucia region of Mesopotamia, stated that the Earth is spherical (and actually orbits the Sun, influenced by the heliocentric theory of Aristarchus of Samos).

Claudius Ptolemy (CE 90 - 168) lived in Alexandria, the center of scholarship in the second century. Around 150, he produced his eight-volume Geographia.

The first part of the Geographia is a discussion of the data and of the methods he used. As with the model of the solar system in the Almagest, Ptolemy put all this information into a grand scheme. He assigned coordinates to all the places and geographic features he knew, in a grid that spanned the globe. Latitude was measured from the equator, as it is today, but Ptolemy preferred to express it as the length of the longest day rather than degrees of arc (the length of the midsummer day increases from 12h to 24h as you go from the equator to the polar circle). He put the meridian of 0 longitude at the most western land he knew, the Canary Islands.

Geographia indicated the countries of "Serica" and "Sinae" (China) at the extreme right, beyond the island of "Taprobane" (Sri Lanka, oversized) and the "Aurea Chersonesus" (Southeast Asian peninsula).

Ptolemy also devised and provided instructions on how to create maps both of the whole inhabited world (oikoumenè) and of the Roman provinces. In the second part of the Geographia he provided the necessary topographic lists, and captions for the maps. His oikoumenè spanned 180 degrees of longitude from the Canary Islands in the Atlantic Ocean to China, and about 81 degrees of latitude from the Arctic to the East Indies and deep into Africa. Ptolemy was well aware that he knew about only a quarter of the globe.

Subhash Kak[5] suggested that the concept of a spherical Earth may be implicit, though with ambiguity, in the Aitareya Brahmana, a Vedic Sanskrit text dating to the first half of the 1st millennium BC. Kak has interpreted a verse of the Aitareya Brahmana as suggesting that the Earth's rotation may be the cause of the apparent motion of the Sun rising and setting. He cites verse 4.18, which states:[5]

However, Shyam Singh Shashi interprets the verse as suggesting that the Sun has one bright and one dark side, its flipping around on itself being the cause of the apparent rising and setting.[6]

The works of the classical Indian astronomer and mathematician, Aryabhata (476-550 AD), deal with the sphericity of the Earth and the motion of the planets. The final two parts of his Sanskrit magnum opus, the Aryabhatiya, which were named the Kalakriya ("reckoning of time") and the Gola ("sphere"), state that the Earth is spherical and that its circumference is 4,967 yojanas, which in modern units is 39,968 km, which is only 62 km less than the current value of 40,030 km.[7][8] He also stated that the apparent rotation of the celestial objects was due to the actual rotation of the Earth, calculating the length of the sidereal day to be 23 hours, 56 minutes and 4.1 seconds, which is also surprisingly accurate. It is likely that Aryabhata's results influenced European astronomy, because the 8th century Arabic version of the Aryabhatiya was translated into Latin in the 13th century.

Anania Shirakatsi (Armenian: Անանիա Շիրակա֝ի), also known as Ananias of Sirak, (610–685) was an Armenian scholar, mathematician, and geographer. His most famous works are Geography Guide (‘Ashharatsuyts’ in Armenian), and Cosmography (Tiezeragitutiun). He described the world as "being like an egg with a spherical yolk (the globe) surrounded by a layer of white (the atmosphere) and covered with a hard shell (the sky)." [9]

Shirakatsi's work ‘Ashharatsuyts’ reports details and mapping of the ancient homeland of Bulgars in the Mount Imeon area of Central Asia.

Around 830 CE, Caliph al-Ma'mun commissioned a group of Muslim astronomers and geographers to measure the distance from Tadmur (Palmyra) to al-Raqqah, in modern Syria. They found the cities to be separated by one degree of latitude and the distance between them to be 66 2/3 miles and thus calculated the Earth's circumference to be 24,000 miles.[10]

Al-Farghĝnī (Latinized as Alfraganus) was a Persian astronomer of the 9th century involved in measuring the diameter of the Earth, and commissioned by Al-Ma'mun. His estimate given above for a degree (56 2/3 Arabic miles) was much more accurate than the 60 2/3 Roman miles (89.7 km) given by Ptolemy. Christopher Columbus uncritically used Alfraganus's figure as if it were in Roman miles instead of in Arabic miles, in order to prove a smaller size of the Earth than that propounded by Ptolemy.[12]

"Important contributions to geodesy and geography were also made by Biruni. He introduced techniques to measure the earth and distances on it using triangulation. He found the radius of the earth to be 6339.6 km, a value not obtained in the West until the 16th century. His Masudic canon contains a table giving the coordinates of six hundred places, almost all of which he had direct knowledge."[16]

Abu Hanifa, founder of the Hanafi school of jurisprudence, and so, one of the greatest scholars of Islam, believed that the Earth was spherical.[17] Many others Islamic scholars declared a mutual agreement (Ijma) that celestial bodies are round, among them Ibn Hazm (d. 1069), Abul-Faraj Ibn Al-Jawzi (d. 1200), and Ibn Taymiya (d. 1328).[18] Ibn Taymiya said, "Celestial bodies are round—as it is the statement of astronomers and mathematicians—it is likewise the statement of the scholars of Islam". Abul-Hasan ibn al-Manaadi, Abu Muhammad Ibn Hazm, and Abul-Faraj Ibn Al-Jawzi have said that the Muslim scholars are in agreement that all celestial bodies are round. Ibn Taymiyah also remarked that Allah has said, "And He (Allah) it is Who created the night and the day, the sun and the moon. They float, each in a Falak." Ibn Abbas says, "A Falaka like that of a spinning wheel." The word 'Falak' (in the Arabic language) means "that which is round."[18][19] In an earlier passage (Vol. 6, pp. 565-566), Ibn Taymiyah discusses why those on the other side of the earth are not below us, just like we are not below them. He writes:

As for the other side of the earth it is surrounded by water. [Note: Admittedly, Ibn Taymiyah - as all Muslim scholars of his day- were not aware of the Americas and believed that the Old World was encompassed by an ocean.] There are no human beings or anything like that [on that side]. Even if we were to imagine that people were on that side of the earth, such individuals would still be on the face of the earth. Those on that side of the earth are not below those who are on this side; just like those on this side are not below those on that side. For as all spherical bodies surround a center point (markaz), no one side of a spherical body is under the other, nor is the north pole under the south [Note: Unlike Western maps, Muslim cartographers (map-makers) would draw the world with the south-side up.] or vice versa. [20]

The Muslim scholars who held to the round-Earth theory used it in an impeccably Islamic manner, to calculate the distance and direction from any given point on the Earth to Mecca. This determined the Qibla, or Muslim direction of prayer. Muslim mathematicians developed spherical trigonometry which was used in these calculations.[21] Ibn Khaldun (d. 1406), in his Muqaddimah, also identified the world as spherical.

Geodesy, also called geodetics, is the scientific discipline that deals with the measurement and representation of the Earth, its gravitational field and geodynamic phenomena (polar motion, Earth tides, and crustal motion) in three-dimensional time-varying space.

The Earth's shape can be thought of in at least two ways;

As the science of geodesy measured Earth more accurately, the shape of the geoid was first found not to be a perfect sphere but to approximate an oblate spheroid, a specific type of ellipsoid. More recent measurements have measured the geoid to unprecedented accuracy, revealing mass concentrations beneath Earth's surface. 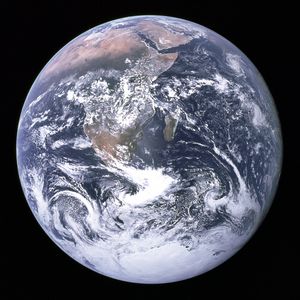 The Earth as seen from the Apollo 17 mission.

There are several reasonable ways to approximate Earth's shape as a sphere. Most preserve a different feature of an ellipsoid that closely models the real Earth in order to compute the radius of the spherical model. All examples in this section assume the WGS 84 datum, with an equatorial radius a of 6,378.137 km and a polar radius b of 6,356.752 km. A sphere being a gross approximation of the spheroid, which itself is an approximation of the geoid, units are given here in kilometers rather than the millimeter resolution appropriate for geodesy.