Generalized markup is based on two novel postulates:

SGML is an ISO standard: "ISO 8879:1986 Information processing — Text and office systems — Standard Generalized Markup Language (SGML)", of which there are three versions:

SGML is part of a trio of enabling ISO standards for electronic documents:

SGML is supported by various technical reports, in particular

SGML descended from IBM's Generalized Markup Language (GML) that Charles Goldfarb, Edward Mosher, and Raymond Lorie developed in the 1960s. Goldfarb, editor of the international standard, coined the “GML” term using their surname initials.[1]. As a document markup language, SGML was originally designed to enable the sharing of machine-readable large-project documents in government, law, and industry. Many of these documents must remain readable for several decades — a long time in the information technology field. SGML also was extensively applied by the military, and the aerospace, technical reference, and industrial publishing businesses. The advent of the XML profile has made SGML suitable for widespread application for small-scale, general-purpose use 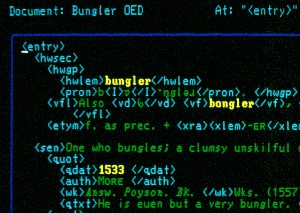 SGML (ENR+WWW) defines two kinds of validity. According to the revised Terms and Definitions of IS 8879 (from the public draft):

A type-valid SGML document is defined by the standard as

An SGML document in which, for each document instance, there is an associated document type declaration to whose DTD that instance conforms.

A tag-valid SGML document is defined by the standard as

NOTE Tag-validity was introduced in SGML (ENR+WWW) to support XML which allows documents with no DOCTYPE declaration but which can be parsed without needing a grammar --the standard calls this fully-tagged--, and standalone documents which have a DOCTYPE declaration but this makes no XML Infoset contributions to the document. Integrally stored supports the XML requirement that elements end in the same entity in which they started. Reference-free supports the HTML requirement that entity references are for special characters and do not contain markup. Commentary, especially commentary that was made before 1997 or that is unaware of SGML (ENR+WWW), that discusses SGML validity will be limited to type-validity only.

The SGML emphasis on validity supports the requirement for generalized markup that markup should be rigorous. (ISO 8879 A.1)

An SGML document may have three parts:

The XML specification (s4.3.1) puts it the following way, though note that full SGML allows implicit markup and some other kinds of tags.

Each XML document has both a logical and a physical structure.

all of which are indicated in the document by explicit markup.

For introductory information on basic, modern SGML syntax, see the XML entry. The following material concentrates on features that are additional to those found in XML and are not a comprehensive summary of SGML syntax.

SGML was developed to generalize and support a wide range of markup languages as found in the mid 1980s. These ranged from Wiki-like terse syntaxes to RTF-like bracketed languages to HTML-like matching-tag languages. SGML did this by a relatively simple default reference concrete syntax augmented with a large number of optional features that could be enabled in the SGML Declaration. Thus not every SGML parser could necessarily process every SGML document, however because the procesor's System Declaration could be compared to the document's SGML Declaration it was always possible to know whether a document was supported by a particular processor.

The notion of customizable features was not appropriate for use over the WWW, so a goal of XML was to reduce optional features to a minimum. However in making its well-formedness rules, XML does not have capabilities to support the declaration and parsing of Wiki-like languages, leaving them unstandardized and difficult to integrate with non-text information systems.

SGML provides an abstract syntax that can be implemented in many different types of concrete syntax. Although the markup norm is using angle brackets as start- and end- tag delimiters in an SGML document (per the standard-defined reference concrete syntax), it is possible to use other characters — provided a suitable concrete syntax is defined in the document's SGML declaration.[2] For example, an SGML interpreter might be programmed to parse GML markup, wherein the tags are delimited with a left colon and a right full stop, thus, an :e prefix denotes an end tag: :xmp.Hello, world:exmp.. According to the reference syntax, letter-case (upper- or lower-) is not distinguished in tag names, thus the three tags: (i) <quote>, (ii) <QUOTE>, and (iii) <quOtE> are equivalent. NOTE: A concrete syntax might change this rule via the NAMECASE NAMING declarations).

SGML has features for reducing the number of characters required to markup a document, which must be enabled in the SGML Declaration. The SGML software need not support every available feature, thus allowing SGML applications to tolerate many types of inadvertent markup omissions; however, SGML systems usually are intolerant of invalid element structures, whereas XML is intolerant of syntax omissions, and does not require a DTD for validation.

The DTD information specifies whether or not a markup element's start- or end- tags might be omitted; SGML has rules for implying omitted tags, the OMITTAG feature. If a tag must be paired or not (as in the previous <QUOTE></QUOTE> pair example) or if it can occur singly (as an HTML <HR>), those specifications are defined in the DTD for the markup language being defined (provided the OMITTAG feature is enabled). In this case, the XML counterpart would be the specific empty tag <hr/>, equivalent to the SGML NET-enabling start-tag, introduced in the TC2 (International Standard ISO 8879:1986, Technical Corrigendum 2, November 1999).

Tags can be replaced with delimiter strings, for a terser markup, the SHORTREF feature. This markup style is now associated with Wiki markup, e.g. wherein two equals-signs (==), at the start of a line, are the “heading start-tag”, and two equals signs (==) after that are the “heading end-tag”.

SGML markup languages whose concrete syntax enables the SHORTTAG VALUE feature, do not require attribute values containing only alphanumeric characters to be enclosed within quotation marks — either double “ ” (LIT) or single ’ ’ (LITA) — so that the previous markup example could be written:

One feature of SGML markup languages is the "presumptuous empty tagging", such that the empty end tag </> in <ITALICS>this</> "inherits" its value from the nearest previous full start tag, which, in this example, is <ITALICS> (in other words, it closes the most recently opened item). The expression is thus equivalent to <ITALICS>this</ITALICS>.

Another feature is the NET (Null End Tag) construction: <ITALICS/this/, which is structurally equivalent to <ITALICS>this</ITALICS>.

can be written as:

Wherein the first virgule ( / ) stands for the NET-enabling “start-tag close” (NETSC), and the second virgule ( / ) stands for the NET. NOTE: XML defines NETSC with a / (virgule), and NET with an > (angled bracket) — hence this construct appears as <QUOTE/>. The third feature is 'text on the same line', allowing a markup item to be ended with a line-end; especially useful for headings and such, requiring using either SHORTREF or DATATAG minimization. For example, if the DTD includes the following declarations:

(and "&#RE;&#RS;" is a short-reference delimiter in the concrete syntax), then:

SGML has many features that defied convenient description with the popular formal automata theory and the contemporary parser technology of the 1980s and the 1990s; about this, the standard warns in Annex H:

There appears to be no definitive classification of full SGML against a known class of formal grammar. Plausible classes may include tree-adjoining grammars and adaptive grammars.

XML is described as being generally parseable like a two-level grammar for non-validated XML and a Conway-style pipeline of coroutines (lexer, parser, validator) for valid XML[1].

The SGML standard does not define SGML with formal data structures, such as parse trees, however, an SGML document is constructed of a rooted directed acyclic graph of physical storage units known as “entities”, which is parsed into a rooted directed graph of structural units known as “elements”. NOTE: The physical graph is loosely characterized as an entity tree, but entities might appear multiple times. Moreover, the structure graph is also loosely characterized as an element tree, but the ID/IDREF markup allows arbitrary arcs.

The results of parsing can also be understood as a data tree in different notations; where the document is the root node, and entities in other notations (text, graphics) are child nodes. SGML provides much apparatus for linking to and annotating external non-SGML entities.

The SGML standard describes SGML in terms of maps and recognition modes (s9.6.1). Each entity, and each element, can have an associated notation or declared content type, which determines the kinds of references and tags which will be recognized in that entity and element. Also, each element can have an associated delimiter map (and short reference map), which determines which characters are treated as delimiters in context. The SGML standard characterizes parsing as astate machine switching between recognition modes. During parsing, there is a stack of maps that configure the scanner, while the tokenizer relates to the recognition modes.

Parsing involves traversing the dynamically-retrieved entity graph, finding or imply tags and the element structure, and validating those tags against the grammar. An unusual aspect of SGML is that the grammar (DTD) is used both passively — to recognize lexical structures, and actively — to generate missing structures and tags (which the DTD has declared omissible). End- and start- tags can be ommitted, because they can be inferred from the grammar. Loosely, a series of tags can be omitted, only if there is a single, possible path in the grammar to imply them. It is this active use of grammars that made concrete SGML parsing difficult to formally characterize.

The W3C XML (eXtensible Markup Language) is a profile (subset) of SGML designed to ease the implementation of the parser compared to a full SGML parser, primarily for use on the WWW. XML currently is more widely used than full SGML. XML has lightweight internationalization based on Unicode. Applications of XML include XHTML, SVG, RSS, Atom, XML-RPC, Semantic Web, and SOAP.

The design of HTML (Hyper Text Markup Language) was inspired by SGML tagging, but, since no clear expansion and parsing guidelines were established, most HTML documents are invalid as SGML documents. Later, HTML was reformulated (version 2.0) to be more of an SGML application, however, the HTML markup language has many legacy- and exception- handling features that differ from SGML's requirements.

The charter for the recently-revived World Wide Web Consortium HTML Working Group says, "the Group will not assume that an SGML parser is used for 'classic HTML'".[3] Although HTML syntax closely resembles SGML syntax with the default reference concrete syntax, HTML 5 is (reportedly) abandoning conforming with SGML application, explicitly defining its own "html" serialization, although, it also defines an alternative XML-based XHTML 5 serialization, which does conform to SGML (WWW). [4]

The second edition of the Oxford English Dictionary (OED) is entirely marked up with an SGML-esque document markup language.[5]

There are other document markup languages partly-related to the SGML and the XML languages, but — because they cannot be parsed or validated or other-wise processed using standard SGML and XML tools — they are not considered either SGML or XML languages; the Z Format markup language for typesetting and documentation, is an example.

DocBook is a markup language originally created as an SGML application, designed for authoring technical documentation; DocBook currently is an XML application.

CALS (Continuous Acquisition and Life-cycle Support) is a US Department of Defense (DoD) initiative for electronically capturing military documents and for linking related data and information.

The EDGAR (Electronic Data-Gathering, Analysis, and Retrieval) system effects automated collection, validation, indexing, acceptance, and forwarding of submissions, by companies and others, who are legally required to file data and information forms with the US Securities and Exchange Commission (SEC).

SP and Jade, the associated DSSSL processors, are maintained by the OpenJade project, and are common parts of Linux distributions. An general archive of SGML software and materials resides at SUNET. The original HTML parser class, in Sun System's implementation of Java, is a limited-features SGML parser, using SGML terminology and concepts.