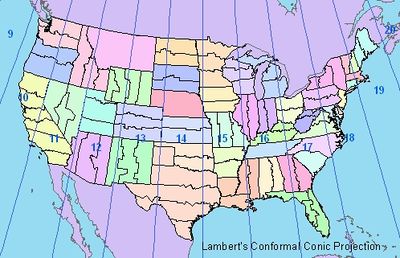 The State Plane Coordinate System (SPS or SPCS) is a set of 126 geographic zones or coordinate systems designed for specific regions of the United States. Each state contains one or more state plane zones, the boundaries of which usually follow county lines. There are 110 zones in the continental US, with 10 more in Alaska, 5 in Hawaii, and one for Puerto Rico and US Virgin Islands.

The system is widely used for geographic data by state and local governments. Its popularity is due to at least two factors. First, it uses a simple cartesian coordinate system to specify locations rather than a more complex spherical coordinate system (the geographic coordinate system of latitude and longitude). By thus ignoring the curvature of the Earth, "plane surveying" methods can be used, speeding up and simplifying calculations. Second, the system is highly accurate within each zone (error less than 1:10,000).[2] Outside a specific state plane zone accuracy rapidly declines, thus the system is not useful for regional or national mapping.

Most state plane zones are based on either a Transverse Mercator projection or a Lambert conformal conic projection. The choice between the two map projections is based on the shape of the state and its zones.[3] States that are long in the east-west direction are typically divided into zones that are also long east-west. These zones use the Lambert conformal conic projection, because it is good at maintaining accuracy along an east-west axis. Zones that are long in the north-south direction use the Transverse Mercator projection because it is better at maintaining accuracy along a north-south axis. States, or parts thereof that have their maximum dimension on the diagonal, such as Michigan or the panhandle of Alaska, use an Oblique Mercator projection, which minimizes the combined error in the X and Y directions. The number of zones found in each state is determined by the total area that the state covers. Some states have only one zone while others have as many as ten.[4]

The grid system that is used for the State Plane Coordinate System is similar to that used for the UTM coordinate system. The grid for the SPCS system has a different origin than that of UTM. The false origin for the SPCS grid measures an arbitrary amount of feet from the western boundary of each zone to get the easting origin. This eliminates the need for a negative easting value. Unlike the UTM system, which uses the equator as its northing origin, the SPCS system uses a place located an arbitrary number of feet from the specific state's southern border as the northing origin. Each state has its own unique central meridian.[4]

The State Plane Coordinate System (SPCS) was developed in the 1930s by the United States Coast and Geodetic Survey to provide a common reference system for surveyors and mappers. The goal was to design a conformal mapping system for the country with a maximum scale distortion of one part in 10,000, which at the time was considered the limit of surveying accuracy.[5] The State Plane Coordinate System is used for local surveying and engineering applications, but is not used if crossing state lines.

When GIS began being used for mapping, the state plane system's Cartesian grid system and simplified calculations made spatial data easier to work with and made spatial processing faster. Even though computer processing power has improved radically since the early days of GIS, the size of spatial datasets and the complexity of geoprocessing tasks being demanded of computers have also increased. Thus, the state plane coordinate system is still useful.[citation needed]

Even though computer processing power has improved radically since the early days of GIS, the size of spatial datasets and the complexity of geoprocessing tasks being demanded of computers have also increased. Thus the state plane coordinate system is still useful.

Originally, the state plane coordinate systems were based on the North American Datum of 1927 (NAD27). Later, the more accurate North American Datum of 1983 (NAD83) became the standard (A geodetic datum is the way a coordinate system is linked to the physical Earth).[6] More recently there has been an effort to increase the accuracy of the NAD83 datum using technology that was not available in 1983. These efforts are known as "High Accuracy Reference Network" (HARN) or "High Precision GPS Network" (HPGN). In addition, the basic unit of distance is either feet or meters. Thus a fully described coordinate system often looks something like: "Washington State Plane North, NAD83 HARN, US Survey feet". This information is needed in order to accurately transform data from one coordinate system to another.

The "foot" and "meter" are the two different units of length when using the State Plane Coordinate System. The standard measure for SPCS 27 is the U.S survey foot and the more commonly used meter is the standard measurement for SPCS 83. The U.S. survey foot is now only used in surveying and mapping applications and is defined as the equivalent to 3.28083333333 feet/meter.[7] There are two standard ways that are used in the U.S. to convert between feet and meters. States that support both feet and meters have legislated which feet-to-meter conversion to use.

This coordinate system can only be used for mapping purposes that are specific to an individual state plane zone. The most common uses for SPCS in cartography are on a local level which can include utility maps (power lines, sewers etc.), county-specific maps, or state government maps. [8] Creating a map that covers a high accuracy area requires that cartographic design principles, such as Visual Contrast and Hierarchical Organization are followed. Such principles will help influence the visual display of the map.

The main problem with the state plane coordinate system is that each zone uses a different coordinate system. This is not a major problem as long as one's needs are within the boundaries of a given state plane zone, as is the case with most county and city governments. However, the need to transform spatial data from one coordinate system to another can be burdensome. Sometimes a regional area of interest, such as a metropolitan area covering several counties, crosses a state plane zone boundary. An example of this is the Seattle metropolitan area. King County, which includes the City of Seattle, uses the "Washington State Plane North" coordinate system, while Pierce County, which includes the City of Tacoma, uses "Washington State Plane South". Thus any regional agency that wants to combine regional data from local governments has to transform at least some data into a common coordinate system.