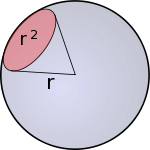 A graphical representation of 1 steradian.

The steradian (symbol: sr) is the SI unit of solid angle. It is used to describe two-dimensional angular spans in three-dimensional space, analogous to the way in which the radian describes angles in a plane. The name is derived from the Greek stereos for "solid" and the Latin radius for "ray, beam".

The steradian, like the radian, is dimensionless because 1 sr = m2·m-2 = 1. It is useful, however, to distinguish between dimensionless quantities of different nature, so in practice the symbol "sr" is used where appropriate, rather than the derived unit "1" or no unit at all. For example, radiant intensity can be measured in watts per steradian (W·sr-1).

A steradian is defined as the solid angle subtended at the center of a sphere of radius r by a portion of the surface of the sphere having an area r2. 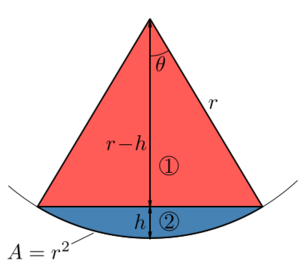 Section of cone (1) and spherical cap (2) inside a sphere

If this area, A, is equal to r2 and it corresponds to the area of a spherical cap (A = 2πrh,) then the relationship

holds. Then the solid angle of the simple cone subtending an angle θ is equal to:

Because the surface area of this sphere is 4πr2, the definition implies that a sphere measures 4π = 12.56637 steradians. By the same argument, the maximum solid angle that can be subtended at any point is 4πsr. A steradian can also be called a squared radian.

The steradian was formerly an SI supplementary unit, but this category was abolished from the SI in 1995 and the steradian is now considered an SI derived unit.

In two dimensions, the angle in radians is related to the arc length it cuts out:

l is arc length, and
r is the radius of the circle.

Now in three dimensions, the solid angle in steradians is related to the area it cuts out:

S is the surface area, and
r is the radius of the sphere.

Steradians only go up to 12.56638, so the large multiples are not usable for the base unit, but could show up in such things as rate of coverage of solid angle, for example.